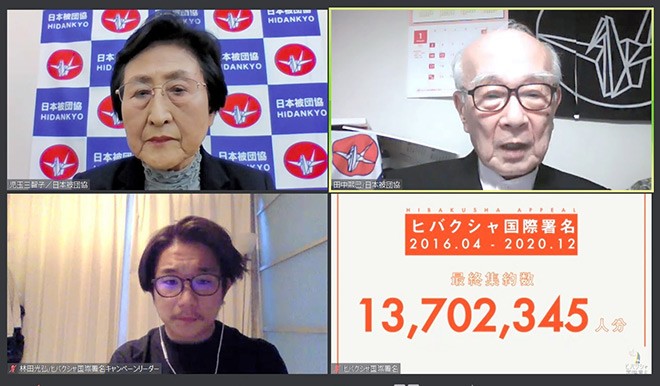 The Appeal of the Hibakusha association holds an online news conference on Jan. 13. (Ryo Sasaki)

A petition by an organization of survivors of the 1945 atomic bombings of Hiroshima and Nagasaki urging all nations to sign the U.N. treaty banning nuclear weapons has garnered a whopping 13.7 million signatures.

The Appeal of the Hibakusha association made the announcement during an online news conference on Jan. 13 after submitting the petition to the United Nations on Jan. 8.

The treaty goes into effect on Jan. 22.

The association collected the signatures on the streets, internet and elsewhere before finishing the effort at the end of December.

A total of 1,497 incumbent and former prefectural governors and mayors in Japan added their names to the petition. The petition also drew support from numerous people in countries other than Japan.

The campaign association, comprised of members of Nihon Hidankyo (Japan Confederation of A- and H-Bomb Sufferers Organizations) and other organizations, began their activities to achieve a nuclear-free world “while we still live” in April 2016.

The Treaty on the Prohibition of Nuclear Weapons was adopted in July 2017. Since then, the campaign has been asking all nations to join the treaty and advocating for it to take effect as early as possible.

The campaign to collect signatures was initially to end by September 2020, but was extended after it appeared that the treaty was likely to go into effect in the near future.