EDITORIAL: Americans must come together to rebuild their fallen democracy 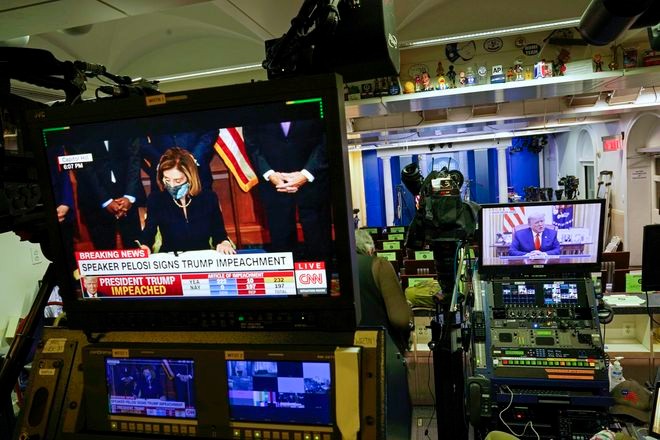 President Donald Trump is seen speaking on a television monitor in an empty press briefing room at the White House in Washington, from a video statement released by President Donald Trump on Twitter as it is broadcast by FOX News, after the U.S. House impeached him on Jan. 13. At left is a replay of House Speaker Nancy Pelosi signing the article of impeachment, as broadcast by CNN. (AP Photo)

The political crisis in the United States has raised serious questions about the future of the country’s democratic system, which is on the brink of catastrophe.

The process of regaining public trust in the system must start immediately.

The U.S. House of Representatives on Jan. 13 impeached President Donald Trump for inciting a violent insurrection against the government with the storming of the Capitol--the seat of the U.S. Congress--by a mob of his supporters.

Trump has become the first president in U.S. history to be impeached twice. Last year, he was impeached for abuse of power.

The lower house’s vote will trigger Trump’s trial in the upper chamber, the Senate, but only after the Jan. 20 inauguration of the new administration of President-elect Joe Biden. An impeachment trial of a president after his departure from the White House is also unprecedented.

The rioters who stormed the halls of the Congress used violence in their attempt to block the process of a transition of power based on the Constitution. As the incident has cast a foul stain on the political history of the United States, it is clearly urgent for U.S. political leaders to take steps to return the situation to normal.

There is a reasonable case for impeaching the president, in addition to criminal investigations by law enforcement, as an attempt by political leaders to confront the seriousness of the act of desecrating the spirit of democracy and recognize where the responsibility lies.

Some members of the Republican Party joined Democrats in voting to impeach, a notable change from the first impeachment vote, when Republicans unanimously voted against impeaching Trump.

But the vast majority of Republicans are still shying away from clearly criticizing the president.

Many of the Republicans who refused to accept the outcome of the November presidential election in line with Trump’s claim of election fraud remain silent.

They should ruminate on the fact that the factors behind the riot will remain and could lead to another incident of violence in the future unless it is ensured that the political process will not stray from the path of righteousness.

A number of Cabinet members and senior administration officials have resigned, while a growing number of businesses have decided to stop making donations or other forms of support to lawmakers who refuse to accept the election results.

Major social media platforms have banned Trump from using them to send out messages.

These steps have provoked a controversy over how they can be consistent with the freedom of speech.

All these moves signal that American society is making desperate efforts to restore the health of democracy in the face of a crisis created by the unprecedented attack on Congress, without leaving the political community to tackle the challenge.

The future of American democracy will depend, to a large extent, on whether the people will remain conscious of the urgency of the situation.

The Chinese government, which has been under fire over its crackdown on democracy in Hong Kong, has made sarcastic comments on the political turmoil in Washington. Beijing has effectively argued that the United States should worry about its own political system instead of supporting the pro-democracy movement in Hong Kong.

With authoritarian politics gaining ground around the world, threatening such basic principles of democracy as human rights and the rule of law, the political upheaval in the United States, the leader of the democratic world, is nothing but a severe blow to the entire world.

Despite a decline in its global influence, the United States is still expected to play the leading role for ensuring stability in the world order.

To do so, the country needs to demonstrate afresh the innate resilience of its democracy.

We hope that the incoming Biden administration and both parties as well as the nation’s civil society will work together to rebuild the future of American democracy.