Indicators point to state of emergency for 3 more prefectures 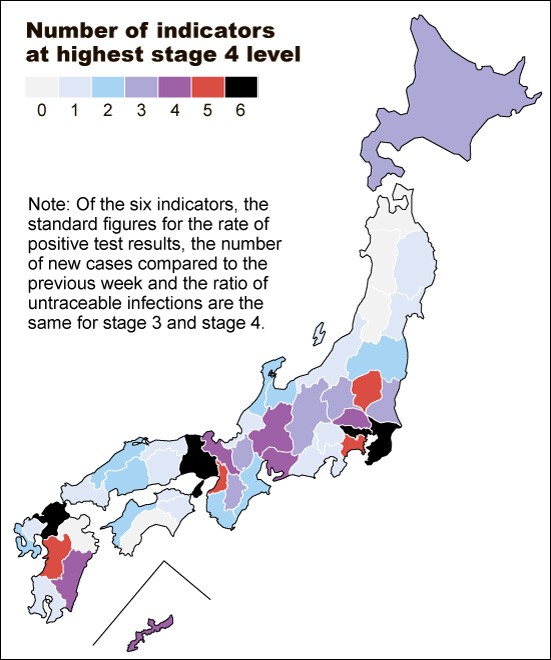 Three prefectures not covered by the state of emergency each have at least four of six indicators showing they have already entered the most serious stage in the spread of novel coronavirus infections.

A government panel of experts handling the COVID-19 health crisis put together the six indicators along with a four-stage classification of where a region stands in terms of infections.

Benchmark figures for each indicator determine what stage a region is in. But there is no ironclad formula to automatically designate a stage.

Still, prefectural governments have been encouraged to use the indicators, which include infection rates and number of available hospital beds, to decide what measures to take to control the spread of the virus.

A study by The Asahi Shimbun found that 14 prefectures, including the 11 under the state of emergency, had at least four indicators at the most serious stage 4 level.

The other three prefectures were Kumamoto and Miyazaki on the main southern island of Kyushu as well as Okinawa.

A stage 4 designation indicates an “explosion” of new COVID-19 cases and that a state of emergency should be seriously considered.

According to the Asahi study as of Jan. 12, four prefectures covered by the state of emergency--Chiba, Tokyo, Hyogo and Fukuoka--were at the stage 4 level in all six indicators.

Tochigi, Kanagawa and Osaka prefectures, which are also listed under the state of emergency, were at the stage 4 level in five indicators, as well as Kumamoto Prefecture, also on Kyushu.

The six indicators are: usage rate of hospital beds set aside for COVID-19 patients; the total number of patients receiving hospital treatment or resting at home or at designated accommodation facilities; the weekly rate of positive results for polymerase chain reaction and other tests; the number of new COVID-19 cases over the past week; a comparison with the number of cases from the previous week; and the ratio of patients whose infection route is untraceable.

Forty-one of the 47 prefectures in Japan saw increases in the number of new COVID-19 cases over the most recent week in comparison to the previous week.

Twenty prefectures exceeded the stage 4 level for the hospital bed usage ratio, and 39 prefectures topped the ratio for the stage 3 level.

Government officials had indicated that the state of emergency would be lifted once a region returned to a stage 3 level.

But because of the strain on a prefecture’s health care structure even at the stage 3 level, the central government will likely continue with various measures even after the state of emergency is lifted to bring the situation to stage 2 or lower.

A prefecture at stage 2 is only recording a slight increase in new COVID-19 cases.

Satoshi Hori, a professor of infection control at Juntendo University in Tokyo, blamed both the government and the general public for failing to bring the spread of new infections under control.

“Infections exploded while the central government was wringing its hands over what to do,” Hori said. “The situation was made worse because it did not take seriously the scientific basis for what was occurring and placed greater emphasis on economic activity.

“At the same time, half of the blame must go to the general public, which did not take the situation seriously and allowed infections to spread through various opportunities to wine and dine,” he said.

The surge in new cases has prompted some prefectural governments to issue their own limited warnings or declarations to residents and businesses in their jurisdictions.

Kumamoto Governor Ikuo Kabashima on Jan. 11 said the prefecture had entered stage 4, after five of the six indicators had exceeded the benchmark levels set for that stage.

Of particular concern was the hospital bed usage ratio, which reached 60 percent on Jan. 11 for the entire prefecture and topped 90 percent for the prefectural capital of Kumamoto city.

Also on Jan. 14, Mie Prefecture released its own declaration, calling for caution about an emergency situation.

“We are at the brink of whether we can prevent an explosive surge in new infections in our prefecture,” Mie Governor Eikei Suzuki said.

However, Mie was not placed under the expanded state of emergency, while its neighbors of Aichi and Gifu were included.

Miyazaki Prefecture, which had a record 105 new COVID-19 cases on Jan. 7, has issued its own state of emergency covering the period from Jan. 9 to 22.

Although the central government’s state of emergency for the 11 prefectures is scheduled to end on Feb. 7, some governors said it should be kept in place until a region returns to stage 2.

Kanagawa Governor Yuji Kuroiwa said lifting the state of emergency when a prefecture was still at stage 3 would only lead to another surge in new infections.

Kamon Iizumi, governor of Tokushima Prefecture on the main island of Shikoku, said the state of emergency should only be lifted after evidence has been presented that a region is moving toward stage 2. He said the government lifted the state of emergency last spring when Tokyo had still not brought its new cases under control, which led to a second wave in the summer.

(Hideki Ito and Tetsuaki Otaki contributed to this article.)