A U.S. military aircraft is seen flying low in the area around Zamami island in Okinawa Prefecture on Dec. 28, 2020. (Provided by Joji Miyahira) 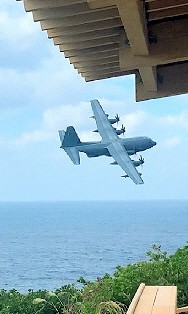 A U.S. military aircraft is seen flying low in the air over Zamami village, part of Keramashoto National Park, in Okinawa Prefecture on Dec. 28, 2020. (Provided by Joji Miyahira)

NAHA--Okinawa’s prefectural assembly has rebuked low-altitude U.S. military aircraft flights over a national park and called for their immediate halt amid growing safety concerns among residents.

An official remonstrance was issued on Jan. 14 admonishing the flights over the public space often used by locals and are calling for a review of the Japan-U.S. Status of Forces Agreement.

Joji Miyahira, an assembly member of Zamami village, part of Keramashoto National Park in the prefecture, witnessed a U.S. military airplane flying low in the air on Zamami island’s western edge on the afternoon of Dec. 28, 2020.

The aircraft’s altitude was so low that it skimmed over the eaves of the observation deck.

“I was so scared that it would hit something,” said Miyahira, who captured the scene with his smartphone.

There are villages and camping sites in the area.

“It appears that the military aircraft chose to fly low through a narrow valley between mountains,” Miyahira said.

Multiple residents of Zamami village witnessed similar low-altitude flights on Dec. 28 and 29, as well as on Jan. 6, according to the village government.

Village officials notified the prefectural government about the incidents, which then sent a report to the Okinawa Defense Bureau.

The bureau inquired about the incidents with U.S. military forces, which confirmed that its special operations transport aircraft MC-130J Commando, which belongs to Kaneda Air Base in the prefecture, had conducted a low-flying training exercise in formation around the Kerama islands.

U.S. forces officials said it was training to effectively operate the aircraft to transfer ground troops and others.

The training was conducted based on the relevant agreements between Japan and the United States, military officials said.

Defense Minister Nobuo Kishi said at a news conference on Jan. 8 that the central government has tolerated the low-altitude flight training, even though the area is not designated for U.S. forces to conduct training there.

“It is important training to accomplish the goals of the Japan-U.S. security treaty,” Kishi said.

“We have seen flight-training exercises in the past,” a village official said. “But it is unprecedented to see military aircraft flying this often and so incredibly low in the air.”

The prefectural assembly's special committee that handles issues related to U.S. military bases held an emergency meeting on Jan. 14 and quickly drew up a statement of protest.

“If an aircraft crashed, it could be catastrophic,” the statement said. “We simply cannot accept such training.”

The statement also urged the U.S. forces to stop conducting flight training over residential areas and demanded a fundamental review of the Japan-U.S. Status of Forces Agreement so minimum altitude restrictions apply to U.S. forces.

The statement was drafted in the name of the committee’s chair. All committee members unanimously agreed on the statement.

In normal times, the prefectural assembly would call an extraordinary plenary session for the statement to be formally adopted. But because of the risk posed over spreading the novel coronavirus, the assembly decided not to do so.

Since the decision was unanimous and made by committee members who represent all parties and factions, the statement is being treated as equivalent of a resolution passed unanimously at the assembly’s plenary session.