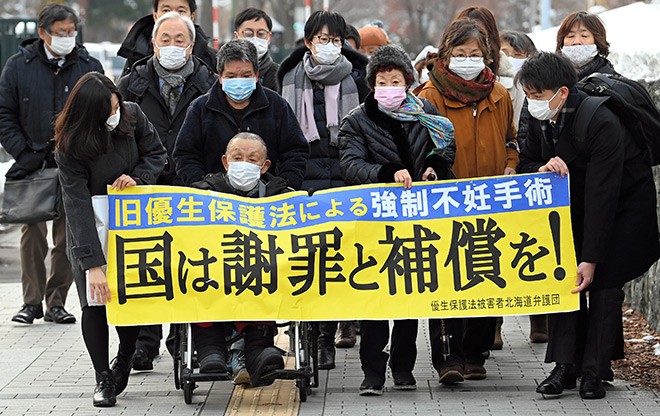 Kikuo Kojima, in wheelchair, and his lawyers and supporters head toward Sapporo District Court on Jan. 15 to hear the ruling on his compensation lawsuit. (Kengo Hiyoshi)

SAPPORO--For the third time, a district court ruled that forced sterilizations under the former Eugenics Protection Law violated the Constitution, but once again, the victim was denied compensation.

The Sapporo District Court on Jan. 15 rejected the plaintiff’s request for redress because the 20-year statute of limitations had expired.

The lawsuit was filed by Kikuo Kojima, 79, who three years ago became the first person who underwent a forced sterilization to reveal his name. He had sought 11 million yen ($106,000) in compensation, and said he plans to appeal the decision.

Forced sterilizations under the old Eugenic Protection Law were aimed at “preventing the birth of inferior offspring” and were performed on people with various disabilities. Some of the operations were conducted on minors who may not have realized what was being done to them.

The Sapporo District Court ruled that three articles of the Constitution were violated through the forced sterilization of Kojima around 1960.

The district court was the first to recognize a violation of Article 24, which states that “laws shall be enacted from the standpoint of individual dignity” on matters related to the family. The court ruled that the forced sterilization denied Kojima the freedom to decide what kind of family he wanted to create.

According to the ruling, the eugenics law did not take into consideration individual dignity and had “exceeded the limits of rational legislative discretion.”

The district court also found the forced sterilization violated Kojima’s right to the pursuit of happiness under Article 13 because his freedom to decide on whether to have children was violated.

The ruling said the forced sterilization “could be termed violent and extremely inhumane.”
In addition, the court said Article 14 of the Constitution, which states that all people are equal under the law, had been violated by the discriminatory treatment against those with psychological problems.

A total of 25 plaintiffs have filed lawsuits in nine district courts or branches around Japan over the forced sterilizations.

The Jan. 15 ruling was the fourth so far. Two past rulings also found the former Eugenics Protection Law to be unconstitutional, but all four rulings have rejected compensation claims.

The ruling also touched upon the April 2019 law that provided monetary support to those who were forcibly sterilized, saying it had come late after a long period when no compensation of any kind was extended to the victims.