Diatom artist works magic in world viewed in a microscope 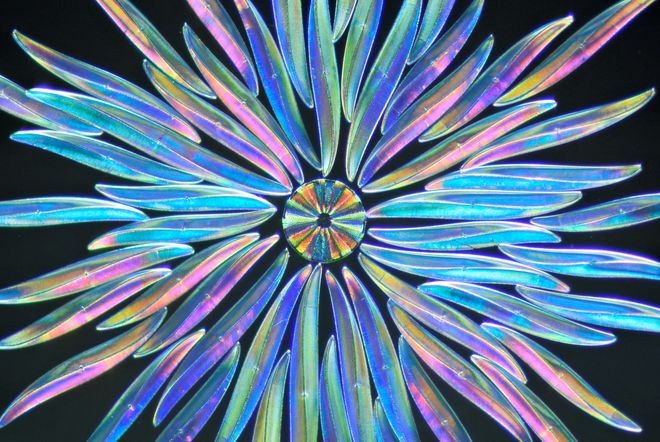 There's more than meets the eye in the creations of artist Osamu Oku.

His breathtaking arrangements of iridescent patterns glimmering on a black background are sheer beauty that can only be glimpsed through a microscope.

Oku, 52, is thought to be one of only a few diatom artists in the world.

Diatoms are so tiny that he has produced about 600 pieces in the past decade. But with his creations gaining newfound popularity, Oku published a book last fall to share photos of his works and creative methods to introduce readers to the mystery of the microscopic world.

Diatoms are a type of phytoplankton found in the oceans and rivers and have glass shells. There are several tens of thousands species, most of which are 0.1 millimeter or smaller and come in shapes such as circles, triangles and rugby balls.

Diatoms can be arranged and placed together to create exquisite geometric patterns, faces, landscapes and other compositions. But many of these artworks are even smaller than a single grain of rice and invisible to the human eye.

However, under a microscope, their glitters and colors differ depending on how the light strikes them, like a kaleidoscope.

Oku became fascinated by the beauty of diatoms when he was a graduate student at the then Tokyo University of Fisheries (now Tokyo University of Marine Science and Technology). He could see diatoms across the field of view as he peered into a microscope to see plankton from Tokyo Bay as part of his research on maritime environment.

"I saw so many shells that appeared delicate and neatly shaped like sculptures," Oku recalled.

He continued his research on diatoms after finishing graduate school before founding a company in 2007. While he sells prepared slides for users to observe diatoms for research and educational purposes, he also started creating artwork.

To collect diatoms, Oku gets rid of mud and other impurities from sea and river water before he uses chemicals and water to clean their shells. Then he uses handmade tools and needles to arrange diatoms on cover slips.

Some diatoms can be broken with just a prod, so Oku picks up each piece with the tip of a single strand of eyelash or eyebrow attached to the tip of a mechanical pencil. He can't cough or sneeze to prevent dust from falling. He must also refrain from using an air conditioner.

It is difficult for Oku to mass-produce his works because he has his own research projects while he also gives lectures at a graduate school and elsewhere.

In many cases, Oku sells his works for several tens of thousands of yen a piece because he wants many people to learn about the charms of diatom art, although the pricing is not worth the effort as it takes several hours just to arrange diatoms into shapes.

"It turns out to be something beyond my own imagination," Oku said. "It feels like I'm making treasures, and to be honest, I wish I could keep them all."

After receiving favorable reviews, the feature was spun off into a separate hardback in September last year from the publisher.