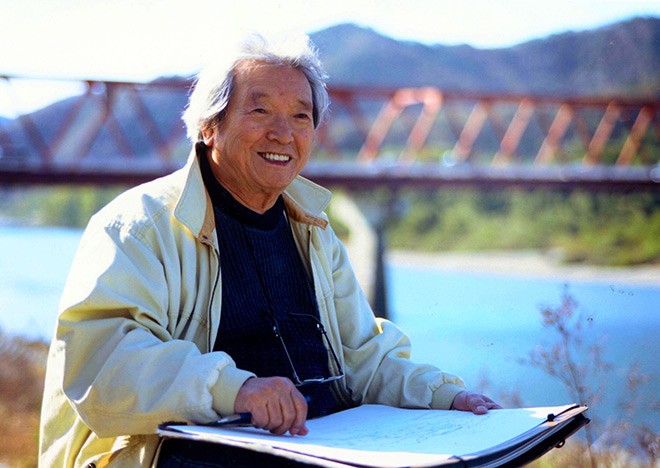 Celebrated painter and illustrator Mitsumasa Anno, whose landscape drawings in pale watercolors and playful picture books earned him international awards and acclaim, died from cirrhosis of the liver on Dec. 24.

He was 94. Anno's funeral was held privately by his family.

Architect Tadao Ando, who designed the Mitsumasa Anno Art Museum in Tango, Kyoto Prefecture, described the artist as “a painter who kept drawing landscapes that are disappearing in the world and in Japan.”

“In an age that digital technology is so powerful, he left us with a gentle and heartwarming world,” Ando said.

Anno was born in Tsuwano, Shimane Prefecture. After he returned from the war, he worked as a substitute teacher and took other jobs before he went to Tokyo in 1950.

He continued drawing while teaching at school, but he later focused on his artistic activities.

Anno's big break as an artist came in 1968 when he published his first picture book, “Mysterious Pictures,” an acclaimed work inspired by Maurits Escher, a Dutch painter known for illusion paintings.

Anno's 1974 picture book, “Anno’s Alphabet,” received numerous prizes in and out of Japan, including the Minister of Education Award for Fine Arts.

In 2012, the Japanese government named him a Person of Cultural Merit.

Anno released a total of nine watercolor picture books on his travel experiences around the world, publishing the first in a series in 1977.

He also drew illustrations for each episode of “Kaido wo Yuku” (On the roads) series by Ryotaro Shiba, a renowned author known for his novels on historical events, when the installments were carried in the weekly Shukan Asahi.

Anno also wrote many highly regarded essays and made numerous bindings.
He enjoyed the friendship of Empress Emerita Michiko over the years. Some of his works include those of plants and flowers on the grounds of the Imperial Palace in Tokyo.

Along with the museum in Tango, the Anno Art Museum in his hometown Tsuwano is also dedicated to the artist.