College cinema clubs link up for anthology movie amid pandemic 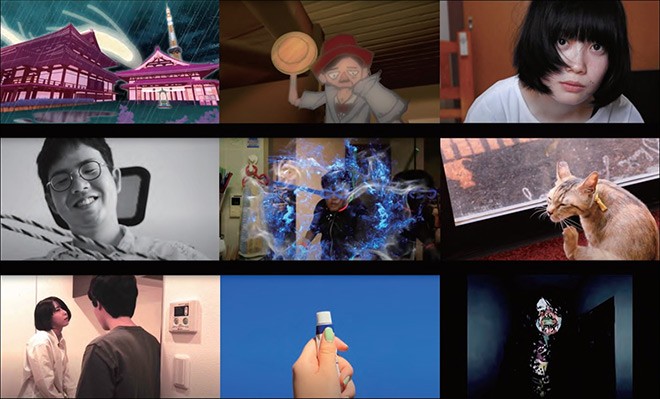 Some of the 180 short films brought together for the collaborative film "Totsuzen Shitsurei Itashimasu!" (Provided by Hiroaki Kumagai)

An anthology film consisting of video clips created by cinema clubs from about 100 universities and colleges across Japan offers glimpses of how students are coping with the novel coronavirus pandemic.

“Totsuzen Shitsurei Itashimasu!” (Please forgive my abrupt approach!), composed of short films of up to one minute in length produced under the theme of “hope,” will be shown at theaters in selected cities.

“I hope that hope will prevail more than the coronavirus,” said Hiroaki Kumagai, 22, head of a cinema club at Gunma University, who served as chief director for the project.

The project began in April last year when the students were forced to stay away from their campuses following the outbreak. Kumagai took to social media to call on fellow film buffs to engage in online exchanges, saying, “Please forgive my abrupt approach!”

In response, more than 500 members of cinema clubs and groups at universities and colleges joined the cause to produce a total of 180 clips.

Each piece was shot between late May and July. Many were shot alone by creators themselves at home, but students utilized teleconferencing as well as editing techniques to express connection with others amid the pandemic.

“It was beyond my imagination because the clips covered a wide variety of genres including science fiction, historical dramas and anime,” Kumagai said.

Of these, 66 clips were selected via a vote before they were edited into a 90-minute film for theatrical screening.

Kumagai also made a short film in which he crushes a tomato in his hand, stir-fries it with penne and eats the dish before the sound of a toilet flushing is heard.

When the finished film, which was added with an animated segment in the opening and ending sequences, was streamed online for a limited time of about two and a half months, it was viewed more than 25,000 times.

The anthology film will be shown at the Athenee Francais Cultural Center in Tokyo on March 30 following the first screening for the general public in Takasaki, Gunma Prefecture, in January. Screenings are also planned in Fukuoka, Kyoto and Hyogo prefectures.