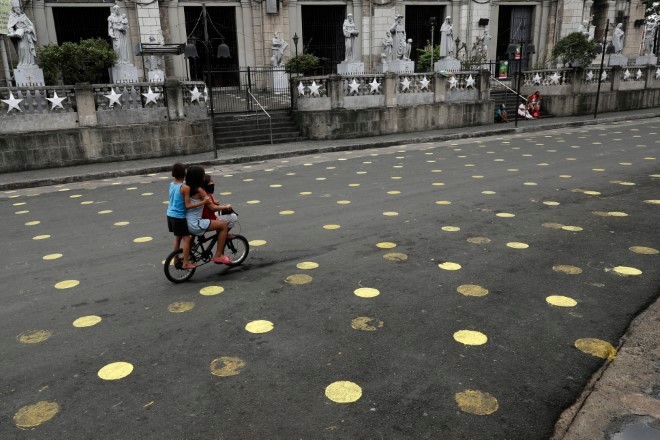 Children ride a bike past markers placed outside the Santo Nino Parish in the Tondo district of Manila on Jan. 15. (AP Photo)

MANILA--Coronavirus infections in the Philippines have surged past 500,000 in a new bleak milestone with the government facing criticism for failing to immediately launch a vaccination program amid a global scramble for COVID-19 vaccines.

The Department of Health reported 1,895 new infections Sunday, bringing confirmed coronavirus cases in the country to 500,577, the second highest in Southeast Asia. There have been at least 9,895 deaths.

The Philippines has been negotiating with seven Western and Chinese companies to secure 148 million doses of COVID-19 vaccine but the effort has been fraught with uncertainties and confusion. About 50,000 doses from China-based Sinovac Biotech Ltd. may arrive later next month followed by much larger shipments, according to the government, but concerns have been raised over its efficacy.

President Rodrigo Duterte says securing the vaccines has been difficult because wealthy nations have secured massive doses for their citizens first.

Duterte’s elite guards have acknowledged they have been inoculated with a still-unauthorized COVID-19 vaccine partly to ensure that they would not infect the 75-year-old president. The disclosure set off a flurry of criticism, including from senators, who moved to investigate the illegal vaccinations of the presidential guards, but Duterte ordered his guards not to appear before the Senate.