Moon ‘honestly bewildered’ by ruling in favor of ‘comfort women’ 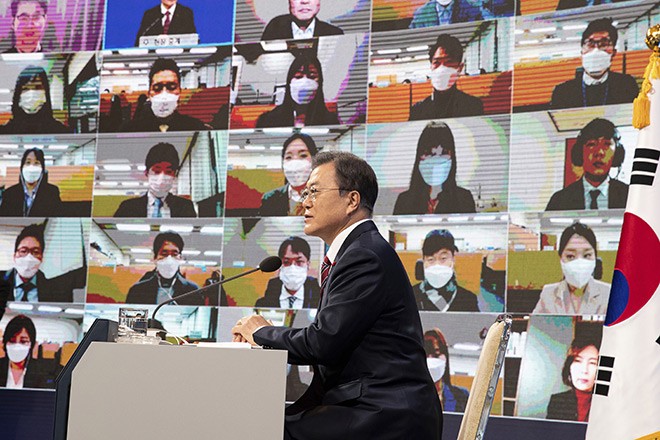 SEOUL--South Korean President Moon Jae-in said a recent ruling by the Seoul Central District Court ordering the Japanese government to pay damages to 12 former “comfort women” took him by surprise, but that Seoul will continue talks with Tokyo to resolve the issue.

“Honestly, I am bewildered,” Moon said at a New Year’s news conference here on Jan. 18, referring to the Jan. 8 ruling.

“We will continue talks with Japan to explore a solution that (the plaintiffs) can agree with,” Moon said, referring to those who were forced to provide sex to Japanese soldiers before and during World War II.

Touching on the agreement South Korea and Japan reached in 2015 on the comfort women issue, Moon said, “The South Korean government recognizes it as an official agreement between the two countries.”

He added, based on the 2015 agreement, “Seoul and Tokyo will continue talks to explore a solution that those women who were given the ruling can agree with.”

Moon also spoke about a dispute over wartime Korean laborers in Japan.

South Korean courts plan to seize and sell assets that Japanese companies own in the country to compensate the plaintiffs in lawsuits.

Moon said he is concerned about the move.

“(Asset sales) will not be good for the relationship between South Korea and Japan,” he said.

Moon emphasized that the priority is to find a diplomatic solution before that occurs. However, he added that the solution “has to be agreed to by the plaintiffs.”