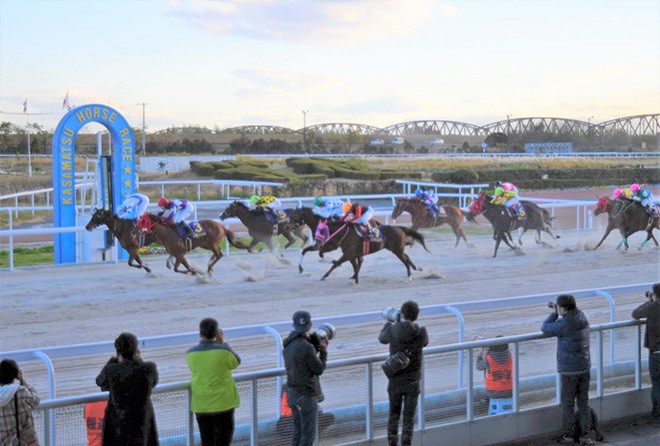 KASAMATSU, Gifu Prefecture--Jockeys and trainers who belong to a local horse racing track are facing accusations of insider betting and concealing millions of yen in income to evade taxes, according to sources.

The scandal has prompted the operator of Kasamatsu Racecourse in Kasamatsu, Gifu Prefecture, to cancel races scheduled from Jan. 19 to 22.

They abused internal information, such as the condition horses were in before races, to make a profit and then concealed their winnings to cheat on their taxes, sources said.

Gifu prefectural police conducted a compulsory investigation in June 2020 into the Kasamatsu Racecourse over a violation of Horse Racing Law committed by three jockeys and a trainer.

But the four repeatedly made bets and did not report their profits in their tax returns.

Tax authorities investigated the four, who announced their retirements in August, and found that the corruption was more widespread than first believed.

According to multiple sources related to the track, a group of jockeys and trainers shared information about the health condition of the racehorses.

The information exchanges included instances where a horse that was “usually a favorite” had “pain in its legs,” and another where a horse scheduled to run in a race was suffering from a nosebleed, the sources said.

The taxation bureau accused a 36-year-old former horse trainer of hiding more than 10 million yen from the government.

“Sometimes I lost (a bet), but I never had a year with a negative balance,” he told The Asahi Shimbun.

The trainer said he did not report the profits in his tax returns, but he has already amended them.

The trainer said a senior jockey had talked him into placing a bet on a racehorse based on internal information sometime around 2013.

He said he stopped after an illegal bet-buying scandal broke out at the Banei horse races in Hokkaido in 2015.

But then he resumed the wrongdoing in 2019, he said.

He registered a bank account in an acquaintance’s name on a betting-ticket sales website and repeatedly purchased tickets through his smartphone.

Since 2019, tax authorities have conducted investigations into jockeys, horse trainers, stable keepers and their relatives.

Authorities found that one man had concealed about 50 million yen over several years.

Most of the accused have apparently since amended their tax returns.

The Gifu prefectural horse race association that operates the Kasamatsu Racecourse declined to comment on the investigation.

“We do not know the details of the exchanges between the taxation bureau and individuals,” it said.

The association has decided to cancel four days of races to verify news media’s reports on the scandal.

Officials also said they will interview jockeys and trainers.

According to the National Association of Racing’s website, 15 jockeys and 19 trainers belong to the race track in Kasamatsu, which opened in 1935.

(This article was written by Junji Murakami and Shino Matsuyama.)