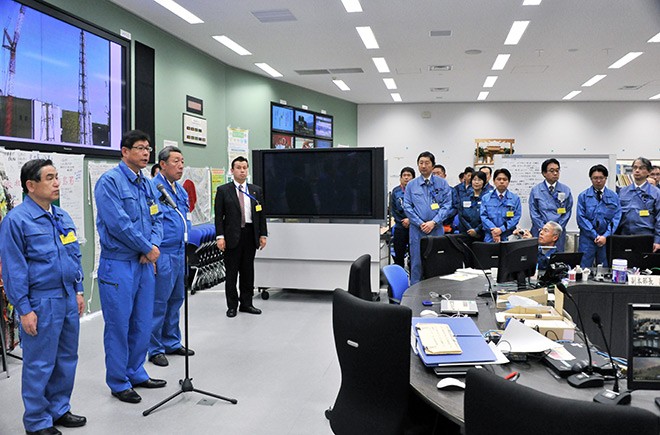 Tsuyoshi Takagi, a minister in charge of reconstruction in Tohoku, gives a speech at an emergency room at the Fukushima No. 1 nuclear plant in 2015. The government is seeking to extend a law that provides financial assistance to local governments hosting nuclear power plants. (Asahi Shimbun file photo)

The central government plans to extend by 10 years a soon-to-sunset law that allows extra financial assistance to jurisdictions housing nuclear power plants--its first time up for renewal since the 2011 Fukushima disaster.

The potentially controversial move could likely spark debate in the Diet due to widespread opposition to nuclear energy following the accident, triggered by the Great East Japan Earthquake and tsunami.

The law was originally enacted in 2000 as a temporary measure and set to expire after a decade. A group of pro-nuclear power lawmakers had sponsored it to ease the concerns of jurisdictions home to nuclear plants.

Those local governments had become increasingly wary about adding more reactors at the existing plants in their communities after a critical accident occurred in 1999 at a facility operated by JCO Co., a nuclear-fuel processing company, in Tokai, Ibaraki Prefecture.

Two workers died and hundreds of residents were exposed to radiation in the accident.

The law was designed to provide public funds to local jurisdictions hosting nuclear plants so that their governments could build new roads and ports, and lure in businesses to their areas through tax breaks.

The law was revised to add another decade to its lifespan right before the triple meltdown at the Fukushima No. 1 nuclear plant in March 2011, when the Democratic Party of Japan was in power.

But the law is set to expire at the end of March this year.

The central government plans to submit a revision bill to extend the funding mechanism by another 10 years during the current Diet session, after gaining Cabinet approval as early as this month.

The government has decided to extend it given that many localities with nuclear plants proceeded with their public works projects while counting on an extension, according to central government officials.

In fiscal 2019, a total of 14.4 billion yen ($138.7 million) was injected into local communities through the funding provisions, according to the Cabinet Office.

But the soundness of renewing the life of the special temporary law has only rarely been publicly debated.

Critics say there is room to question whether the extension can be justified.

Apart from the temporary law, local governments with nuclear facilities have received a large amount of grants and subsidies from the national coffers to help develop their communities since the mid-1970s. The source of that funding is ultimately the electricity charges that users pay.

The proposed extension follows a pledge by the central government to reduce the country’s reliance on nuclear energy in response to growing public opposition to nuclear power.