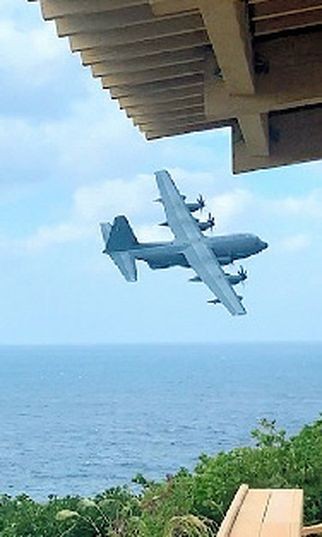 A U.S. military aircraft is seen flying low in the area around Zamami island in Okinawa Prefecture on Dec. 28, 2020. (Provided by Joji Miyahira)

Local residents were terrified by the sight of the planes practically threading narrow valleys between mountains, and a special committee of the Okinawa prefectural assembly unanimously passed a protest resolution on Jan. 14.

These exercises are beyond risky. They are disasters waiting to happen, and we cannot condone the recklessness of U.S. forces for continuing them.

Under a special aviation law based on the Japan-U.S. Status of Forces Agreement (SOFA), U.S. military aircraft are exempt from altitude regulations. However, Tokyo and Washington in 1999 agreed to "secure the utmost safety and minimize the impact (of U.S. military aircraft) on local residents."

The recent ultra-low-altitude training exercises were in blatant contravention of that agreement. Tokyo should protest vehemently and demand that Washington abide by the agreement.

And not to be overlooked is the fact that the exercises took place outside the designated training airspace.

But Defense Minister Nobuo Kishi dismissed that out of hand when he told a news conference, "Flight training is indispensable to the maintenance and improvement of aviation skills" and "is an important factor in the attainment of the goals of the Japan-U.S. Security Treaty."

Kishi's remarks were practically identical to the assertions of the U.S. forces. We could not believe our ears.

For better or for worse, there are 20 vast U.S. military flight training areas in Okinawa. So, why did the exercises have to take place outside those areas? Kishi didn't give the reason.

One thing that became quite clear is that Kishi's eyes are focused on the United States, not the Japanese people. It was only natural, then, that the Jan. 14 protest resolution criticized Kishi by name, even though the resolution's supporters included members of the ruling Liberal Democratic Party.

Okinawa is not the only place where low-flying U.S. military aircraft are feared and loathed by local residents. On the Japanese mainland, too, people's daily lives are being threatened in and around communities that host U.S. military bases.

The National Governors' Association was the first to make issue of this fact in its 2018 "proposals regarding the burden of hosting U.S. military bases," calling for a fundamental review of the SOFA and the application of Japan's aviation law and other ordinances to the U.S. armed forces in Japan.

Last autumn, the association claimed that its 2018 proposals "could hardly be said to have been acted upon by the government," and renewed its call for the SOFA's amendment.

The association also demanded that a fact-finding survey be conducted on low-altitude flight training, and that pre-flight information be made available on matters such as flight routes and the duration of training sessions.

These are definitely not unreasonable demands.

According to a survey by the Okinawa prefectural government, U.S. military aircraft in Germany, Italy, Belgium and Britain are subject to the domestic laws of these nations.

It is the responsibility of Japan's political leaders to prioritize the safety of their citizens and allay their fears by exploring how best to apply the Japanese law to U.S. military aircraft in Japan. It is not their responsibility to repeat a litany of excuses for their inaction--such as past precedents and differences between the Japanese security environment and that of European nations.

In his policy speech on Jan. 18, Prime Minister Yoshihide Suga asserted, "I have consistently sought to bring 'peace of mind' and 'hope' to the Japanese people."

He needs to act on his words for the sake of not only the long-suffering people of Okinawa, but for all Japanese residents who are being put in harm's way by their proximity to U.S. bases.