VOX POPULI: Here’s to the new White House and its thankfully worthy residents 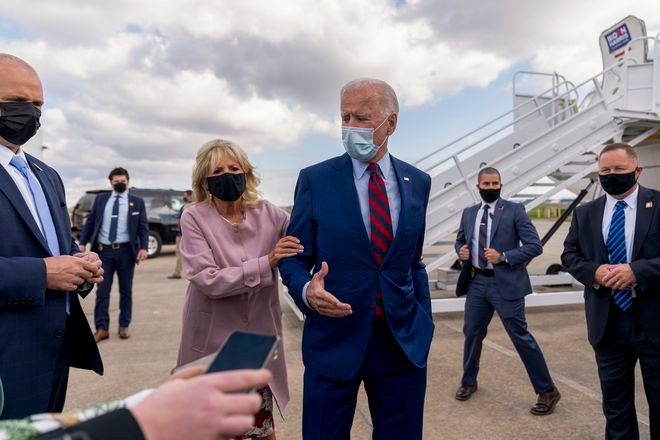 Jill Biden moves her husband, Democratic presidential candidate Joe Biden, the former vice president, back from members of the media as he speaks outside his campaign plane in New Castle, Delaware, on Oct. 5, 2020. (AP Photo)

Even after her husband became the vice president of the United States, Jill Biden continued to teach school.

She asked her Secret Service agents to dress like students and carry their tools of the trade in their backpacks, not wanting to cause unnecessary worries to her students.

From before her marriage to Joe Biden, she was teaching English at local high schools and junior colleges. After she earned her doctorate at 55, she earned the nickname "Dr. B."

She was a strict teacher who gave a lot of homework assignments.

But she was ever gentle with students who were immigrants or from underprivileged families.

There were times when she raced out of the classroom to join her husband on Air Force Two for overseas visits.

Dr. Biden has decided to keep teaching as the first lady. Each chapter of her autobiography brings out her sensible, steadfast personality.

She certainly evoked empathy with this observation: "I couldn't just move to Washington and only live Joe's life."

Born into a Jewish family, he has two grown children from a previous marriage. And as America's first second gentleman, he reportedly intends to work as a part-time university lecturer.

Back when I was stationed in the United States as a correspondent, I was surprised by the sheer number of people who insisted that the first lady must lead the public by her example as a devoted mother and dutiful wife, nothing else.

I could not be happier that this kind of prehistoric thinking has been effectively retired by the incoming presidential, as well as vice presidential, couples.

A new U.S. administration is being sworn in on Jan. 20. After the last four woeful years, Americans don't have a moment to lose if they are to heal their badly mangled society.

I wish the new leaders and their spouses every happiness and success for embodying a lifestyle that matches the times.