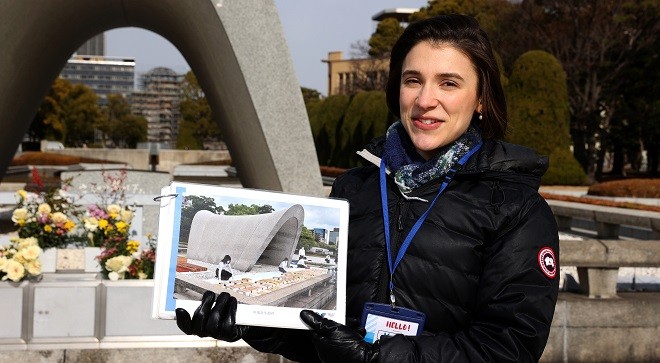 Mary Popeo, who makes a living by being a peace tour guide, poses in the Hiroshima Peace Memorial Park in the city’s Naka Ward on Jan. 7. (Jun Ueda)

HIROSHIMA--Mary Popeo remembers being shocked when she learned about the horrendous effects of the 1945 atomic bombing of Nagasaki, which she was never taught about back home in the United States.

The 28-year-old Boston native saw photos taken immediately after the bombing when she visited the city as a college student, as part of her studies on the history of persecuted Christians there. And she was able to meet a hibakusha survivor of the blast.

“Do you resent the United States?” Popeo asked after she first heard the survivor’s oral testimony of the atomic bombing.

The hibakusha replied, “No, because it’s our role to stop the vicious cycle.”

Popeo was impressed by the survivor’s desire to draw lessons from their own harrowing experience to build a better future. It inspired her to take up the cause of peace activism and, together with hibakusha, educate people about the horrors of the war to prevent that kind of disaster from occurring again.

As a U.S. citizen, she hesitated at first to dedicate herself fully to this mission here. But then she met Steven Leeper, the first American to have served as chairman of the Hiroshima Peace Culture Foundation, which oversees and operates the Hiroshima Peace Memorial Museum. The encounter put her doubts to rest.

Popeo moved to Hiroshima in 2016 and worked with Leeper, 73, the following year to co-found Peace Culture Village, a nonprofit organization in Hiroshima that plans and operates educational programs.

Now, Popeo guides people through online visual tours, offered in both Japanese and English, of areas in this western city around the Atomic Bomb Dome--a symbol of the devastation caused by the nuclear blast.

She charges a fee for the tours because she is intent on finding a way to make peace activism into a livelihood--something sustainable that can be passed down to the next generation of activists.

She decided to do that after learning that many passionate student activists leave the peace movement altogether after graduation, since they cannot make a living off of activism alone.

Popeo said she often reflects on whether she is qualified to pass on the stories and collective trauma of atomic bomb survivors and if she knows enough of the historical details. But those concerns also help propel her forward on her mission.

“I ruminate on the voices of atomic bombing survivors as I ask myself those questions and turn that into a motivation for learning more,” she said.