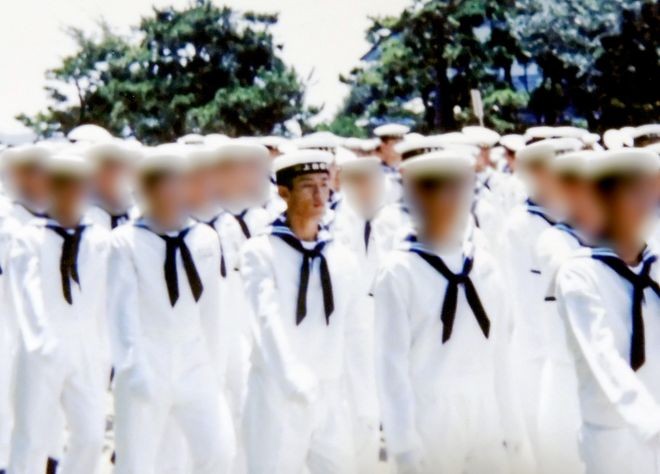 Takayuki, middle, when he was a Maritime Self-Defense Force member (Provided by his bereaved family)

When a mother heard a persuasive sales pitch to help her son, who had been a social recluse for two decades, to return to a normal life, she thought it was the answer to her prayers.

That's why she paid a fortune to a Tokyo-based support company and let five strangers enter her home four years ago and drag off her son, Takayuki.

But she never thought it would be the last time she would see him alive. She had entrusted the smooth-talking company to help her son find a job, get back on his feet and live on his own.

But two years later, Takayuki was found dead in his apartment, alone and nothing but skin and bones. He was 48.

His mother then received an unfamiliar suitcase from the center, which claimed it belonged to Takayuki.

The Cabinet Office in 2019 estimated that there were more than 1 million “hikikomori” social recluses, among whom about 613,000 were between the ages of 40 and 64.

These middle-aged social recluses and their aging parents have increasingly been isolated in society without adequate and appropriate support, experts said.

To fill the void, private firms have lured desperate parents into placing a troubled child into an institution by promising to help them return to the working world--at an exorbitant cost.

Takayuki’s mother was one such parent.

“I need to know what happened to my son,” said the 81-year-old woman.

In his mother’s eyes, Takayuki was a normal functioning adult until he was about 26.

He joined the Maritime Self-Defense Force after graduating from high school and served for three years. He then started working for a company, but had difficulty dealing with his boss and quit.

Takayuki started refusing to leave the house in Saitama Prefecture where he lived with his parents. Friends sometimes stopped by to visit Takayuki, but he was reluctant to see them.

Takayuki’s parents sought help from every source imaginable--the city government, a public health center, a hospital, a group of families who were facing the same problem. But nothing improved the situation.

Takayuki’s father died in 2016, worrying about his son’s future. His mother, then in her mid-70s, became distressed, wondering what would happen to Takayuki when she passed away.

One day, her daughter, who had gotten married and lived separately, found a facility called “Akebonobashi self-help training center” on the internet.

The business was located in Tokyo’s Shinjuku Ward. His mother was impressed with the pamphlets put out by the center, which offered to, “Let our self-help professionals help you.”

It promised the staff would keep in touch every day with their clients after they got a job, meet with them frequently and continue following up with them for a long time.

The sales pitch was compelling enough for his mother to attend an orientation session. She was shocked, however, when she learned that a six-month “training” intervention would cost 9.1 million yen ($87,500).

The staff pressured her to sign up, saying, “It will be harder and harder to solve the problem as it continues on over a prolonged period and you get older.”

The mother signed a contract with the company. She decided to sell the house that she and her husband had built to raise cash for the training.

In January 2017, five center staffers showed up at her home. Their mission was to “convince” Takayuki to leave his room.

His mother was told not to tell her son about their impending visit and she did not.

She guided the crew to Takayuki’s room on the second floor of the home. One of the staffers told her, “You should stay on the first floor.”

She went downstairs and waited in her living room.

Then she heard a scream. Soon, Takayuki, in his pajamas, came down the stairs. He was sandwiched by the staffers front and back.

His mother had prepared a big suitcase full of clothes for Takayuki, including new suits and shoes. The suitcase was a keepsake of her husband’s.

She handed it to the crew and watched the van that Takayuki was bundled into drive off.

It was the last time she would see him alive.

Takayuki was placed in the Akebonobashi center in January 2017 after being taken from his home.

His mother was told that Takayuki started commuting from the center’s dormitory to a job-placement office from around the spring.

One of the center's rules prohibited parents from communicating directly with their child because it “offers a hindrance to the child becoming self-independent,” the center said.

Instead, the center continued sending her a diary written by Takayuki and other materials.

In one entry, he wrote, “I didn’t get a security job. I couldn’t stop crying about it.”

In another, he penned, “I can’t find any job, and I am so frustrated.”

After six months, the contract period expired. Takayuki still was struggling to find a job.

In August 2017, she was told that Takayuki would be moved to another training facility of the center located in Yunomae, Kumamoto Prefecture.

His mother paid an additional 3.8 million yen for the continuation of service.

Shortly after that, the center stopped sending her regular reports, including his diary entries.

In December that year, one of the staffers told her that Takayuki had landed a job at a local care facility.

She said she wanted to contact Takayuki but did not because the center instructed her not to do so.

“I and my daughter were really looking forward to seeing Takayuki soon, who we believed was in better spirits,” the mother recalled thinking.

Then the phone rang.

One morning in April 2019, his mother received a phone call. A staff member of the center was on the other end of the line.

“Your son has died,” the staffer told her.

Takayuki’s apartment was in Asagiri, Kumamoto Prefecture, not far from the center’s training facility.

A real estate company contacted the training facility because Takayuki had fallen behind in his rent, which was paid by automatic withdrawal.

The facility staff came to Takayuki's apartment only to find his dead body.

His mother rushed to the town. A local doctor told her that he had been dead for about one to two weeks and that the cause was probably starvation.

She was united with Takayuki at a local police station. But the body lying there seemed like another person. Takayuki had a flowing beard and had grown extremely thin.

A small refrigerator in his apartment was empty.

“Did he become a social recluse again after he was employed and run out of food?” his mother wondered.

She found a letter of separation issued for a displaced worker in his room, which showed Takayuki quit the care facility he was working at in July 2018, nine months before his death.

The contract she signed with the center promised the staff would continue to offer advice and support after Takayuki found employment.

But the center’s staff apparently did not even know that Takayuki had quit his job.

The last withdrawal he made was for 3,000 yen according to the record, more than two months before he was found dead.

“I need to know what had happened to my son,” his mother said as she contacted a lawyer to prepare a lawsuit against the center.

But in December 2019, Clear Answer, the company that operated the center, went bankrupt and the staff disappeared.

The bankruptcy occurred as other people who had signed contracts with the center filed a series of damage lawsuits against the company, complaining that the center “failed to provide value for the money” they paid.

At least one person accused the center of having been “violently removed from home and locked up in a facility.”

Hiromu Mochizuki, a lawyer who has filed damage suits against the center, said about Takayuki's case, “It is safe to say that the center recklessly took him out of his home, which was a safe place for him. Then it cut off the parent-child communication and left him without the ability to earn a living.”

The mother, smitten with remorse, has never stopped talking to her son’s picture displayed on the family alar.

“Did my son think that he got kicked out of his home by me and had no place to return to?” she wondered. “I just want to tell him that that’s not what happened. I apologize to Takayuki every day.”

Right next to the photo on the Buddhist altar is an old suitcase.

The center sent it to her a month after Takayuki was found dead as one of his belongings.

The luggage is completely different, both in color and shape, from the one she packed for him and handed to the center’s staff.

“This is not the same one. I don’t know whose suitcase it is,” his mother said.

A lawyer representing the center declined to be interviewed by The Asahi Shimbun, saying, “It involves a privacy issue.”