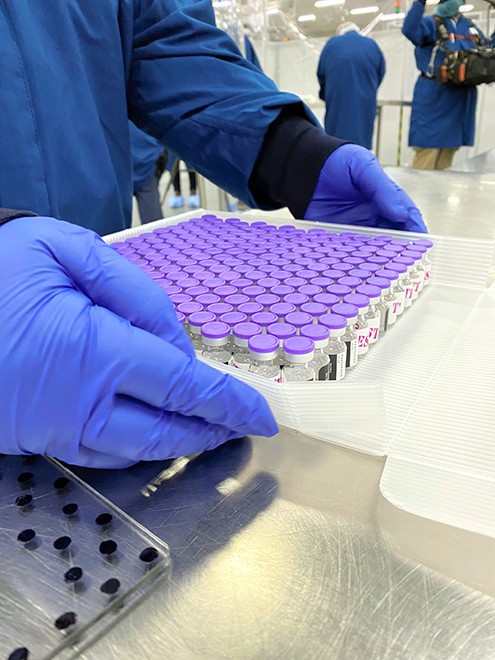 Japan is banking on a vaccine as a game-changer in the COVID-19 pandemic, but it first must overcome a potential logistical nightmare, possible bureaucratic turf wars and labor shortages to inoculate the population.

The country has yet to approve a vaccine, but complaints against the Yoshihide Suga administration concerning the vaccination program have already started.

“It is a project the likes of which we have never seen before,” a government official said.

The success of the program could hinge on the coordination abilities of Taro Kono, the administrative reform minister. Suga on Jan. 18 appointed Kono to a special Cabinet post to oversee the entire process of vaccinating the population.

Suga has repeatedly said the government plans to begin inoculations by the end of February. Countries in Europe and North America have already started their vaccination procedures.

U.S. pharmaceutical company Pfizer Inc. has applied for Japanese approval of a vaccine that it co-manufactured with German biocommerce company BioNTech.

Under Japan’s expected schedule, Pfizer will submit additional data from clinical trials by the end of January, and the health ministry will approve the vaccine by the end of February after its safety and effectiveness are confirmed.

The government plans to immediately start vaccinating about 10,000 health care workers who give their consent and are affiliated with selected hospitals and groups, such as the National Hospital Organization.

The group will then be required to report their health conditions for a certain period so that government officials can check for possible side effects from the vaccine. The second group to receive the vaccine will also consist of health care workers.

After March, the rollout will start covering people 65 years old and older, those with pre-existing conditions and then workers at facilities for elderly people.

The government has not determined when the general public can receive the shots, but some sources said it will be around June.

The government is expected to make the vaccine available only to those who are 16 and older because data from clinical testing conducted by Pfizer and BioNTech are insufficient for those under 16.

Local governments will take charge of the inoculations.

Even if the plan goes as scheduled, it will take at least several months for the necessary doses to go around the country.

But many things could go wrong.

Pfizer’s vaccine must be stored at around minus 70 degrees, including during transportation.

The ministry plans to ask local governments to set up special freezers to keep Pfizer’s vaccine at 10,000 health care facilities.

To provide wide distribution of the vaccine among residents, the vaccines will be transported while being refrigerated to local clinics and hospitals.

Local governments will receive the vaccine in sets of 1,000. After thawing, the vaccine’s storage life is five days.

To avoid wasting doses, local governments are expected to hold mass inoculation events where a large number of people can be vaccinated in one setting.

However, in many areas, particularly densely populated urban centers, officials are racking their brains over how to hold such events safely amid the pandemic’s “third wave.”

In addition, many communities and health care facilities have already faced labor shortages on the front lines of the pandemic. The months-long vaccination project will undoubtedly further strain conditions.

Local government officials have expressed concerns that they could lack sufficient numbers of doctors and nurses to carry out the vaccination operation.

Fukushima Governor Masao Uchibori on Jan. 19 criticized the central government for remaining vague about what local governments should do to prepare for the vaccination program.

“We have asked the related ministries and agencies to tell us about the necessary arrangements and staff sizes, among other things, as soon as possible, but we still remain uncertain about all of these things,” Uchibori said.

Local officials will also have to handle the large number of applications and inquiries from residents at inoculation sites and other places.

The central government estimates that about 50 million people are in the high-priority groups for the COVID-19 vaccine, namely health care workers and elderly people.

The vaccine is not mandatory and will be offered for free of charge to all residents.

Lawmakers and others have pointed out that turf-minded bureaucrats could hinder the smooth rollout of the vaccine, given the many ministries involved in the process.

The health ministry would be in charge of inoculations, the transportation ministry will take care of distribution, the economy ministry will handle the cryopreservation, and the internal affairs ministry will make arrangements with local governments.

Kono and Takuya Hirai, minister of digital transformation, on Jan. 19 discussed the idea of using the My Number identification system to manage the vaccination history.

Ken Ishii, a professor at the Institute of Medical Science at the University of Tokyo, said the government “does not have much lead time, and the scale of the vaccination will be unprecedented.”

“For local governments, it will be more like a disaster response,” Ishii said.

He advises government officials to learn from problems reported overseas concerning the vaccination programs and make plans to deal with such issues.