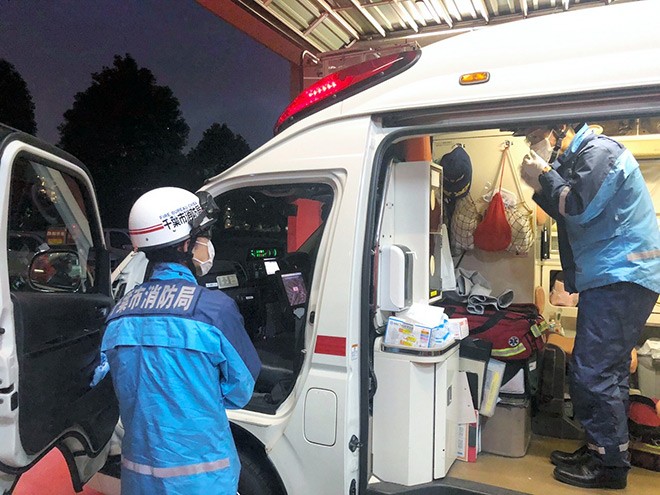 Chiba city rescue workers wear protective clothing and goggles whenever their ambulance is called for an emergency. (Provided by Inage Fire Station)

The spread of the novel coronavirus has led to a doubling of the number of times ambulance workers have found difficulties in finding hospitals willing to take in their patients, government figures showed.

In 3,317 cases nationwide in the week up to Jan. 17, rescue workers were denied access to hospitals at least three times and were forced to wait at least 30 minutes before driving to hospitals that accepted the patients, according to data compiled by the Fire and Disaster Management Agency.

Some rescue workers said that the mere mention that the patient has a fever led to hospital officials denying access.

Many of the hospitals that have been called may not have the equipment or personnel to care for COVID-19 patients in addition to the individual’s particular condition.

According to the FDMA, the latest weekly figure was 2.35 times that for the week up until Dec. 6 when there were 1,410 cases of difficulty in finding a hospital.

The pace at which difficult cases are increasing has accelerated.

The weeks from mid-December until Jan. 3 saw increases of between 100 and 200 cases from the previous week. But in the week ending Jan. 10, the increase was 528. The number of cases jumped by 610 in the following week.

That trend coincides with the spike in new COVID-19 cases.

“With the increasing number of new infections, we have received a greater number of reports regarding difficulty finding a hospital for those who called for an ambulance,” Ryota Takeda, the internal affairs minister who oversees the FDMA, said at his Jan. 15 news conference. “There will be a need to continue monitoring this trend.”

The Tokyo Fire Department reported 1,577 difficult cases in the week ending Jan. 17, 2.5 times the figure for the week ending Dec. 6. The fire department does not handle cases on the outlying islands or in Inagi, a city in the western suburbs.

Other major cities now under the state of emergency for the novel coronavirus pandemic have also seen sharp rises in difficult cases between the week ending Dec. 6 and the week ending Jan. 17.

During the first wave of COVID-19 infections in spring 2020, the largest number of difficult cases over a one-week period was 1,780. But that record was broken in the week ending Dec. 27, with 1,920 cases. Since then, the record has been reset every week.