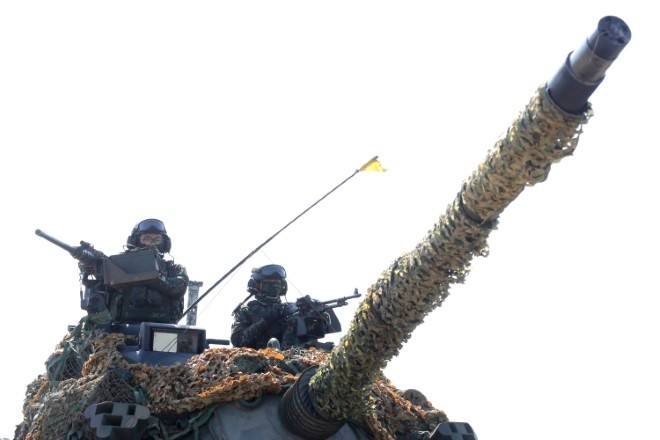 Two soldiers guard on a tank during a military exercise in Hsinchu County, northern Taiwan, on Jan. 19. (AP Photo)

TAIPEI--Taiwan’s relationship with its most important global backer the United States has gotten off to a strong start with President Joe Biden’s new administration, after the island’s de facto ambassador attended his inauguration.

That had made Trump a popular figure in democratic Taiwan, which China views as its own territory, to be taken by force if needed, and unnerved the government that Biden may not be as helpful.

“President Biden will stand with friends and allies to advance our shared prosperity, security, and values in the Asia-Pacific region--and that includes Taiwan.”

Taiwan’s Foreign Ministry lauded the attendance of Hsiao, who is close to Taiwan President Tsai Ing-wen.

“The first-ever invitation to Taiwan’s representative to the U.S. to attend the Inaugural Ceremonies, the most significant event celebrating U.S. democracy, highlights the close and cordial ties between Taiwan and the United States based on shared values,” it said.

The United States ended formal diplomatic ties with Taiwan in 1979, switching recognition to China, though Washington is bound by law to provide Taiwan with the means to defend itself.

In a video message on her Twitter account, Hsiao said she was honored to be there representing Taiwan’s government and people.

Tsai sent her congratulations too, saying she hoped the two sides could work together to maintain regional democracy, freedom, peace and stability, Taiwan’s presidential office said.

Biden’s nominee for secretary of state, Antony Blinken, said on Tuesday he was in favor of greater engagement with Taiwan.

Tsai met Blinken in 2015 at the State Department when he was deputy secretary of state and she was the presidential candidate for Taiwan’s Democratic Progressive Party.