Edano demands Suga apologize, focus on virus and not economy 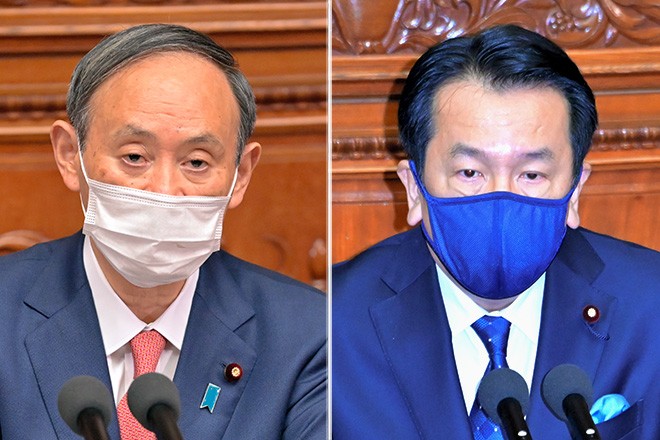 Prime Minister Yoshihide Suga deflected criticism over his handling of the novel coronavirus pandemic but indicated a willingness to compromise with opposition parties on the government’s proposal to punish noncompliance during the health crisis.

At the Jan. 20 Lower House plenary session, Yukio Edano, head of the main opposition Constitutional Democratic Party of Japan, said the prime minister owes the public an apology for his missteps that worsened the spread of novel coronavirus infections.

“There were signs in November of a further spread of infections,” Edano said. “I believe you should begin by admitting that delays had been made in various decisions and apologize.”

Suga, however, only repeated that he relied on the views of an experts’ panel for his decisions, such as suspending the Go To Travel tourism promotion campaign and declaring a state of emergency for the greater Tokyo metropolitan area.

The delays in ending the tourism campaign and issuing the state of emergency fueled criticism that Suga is more focused on rebuilding the economy than ending the heath crisis.

Edano suggested that rather than try to control the novel coronavirus while continuing with normal economic activity, the government should follow the examples of Taiwan and New Zealand, which took immediate measures to bring their COVID-19 infections to zero.

He said those island economies succeeded because their goal was “zero coronavirus” rather than “with coronavirus,” as has been the emphasis of the Japanese government in seeking to maintain economic activity.

But Suga only said, “We are thoroughly implementing effective measures.”

The ordinary Diet session convened on Jan. 18, and the first order of business is to revise the special measures law on dealing with the novel coronavirus pandemic as well as the Infectious Diseases Prevention Law.

The main sticking point is the government’s proposal to impose fines against businesses and criminal penalties against infected individuals who refuse to cooperate with authorities on halting the spread of the virus.

Edano asked Suga to drop the proposal to criminally punish COVID-19 patients who refuse to be hospitalized.

Suga responded, “We will revise the special measures law to include penalty provisions.”

But when Toshihiro Nikai, secretary-general of the ruling Liberal Democratic Party, touched upon revising the special measures law, Suga, who has also been criticized as indecisive, said, “We will continue to hear the views of the ruling and opposition parties in order to submit the legislation as soon as possible to the Diet.”

Although the Suga Cabinet is expected to approve the legislation on Jan. 22, the ruling coalition is expected to enter discussions with the opposition about amending the wording on penalty provisions, according to sources.

Edano also blasted the government’s third supplementary budget proposal that includes outlays for the various Go To campaigns to promote consumption. He asked that those items be removed from the budget draft because they were “out of focus” at a time when attention should be placed on stopping the spread of COVID-19.

But Suga said sufficient funds had been set aside for dealing with the novel coronavirus even without rewriting the budget draft.

The funds for the Go To campaigns were included because the supplementary budget proposal was compiled before Jan. 7, when the prime minister declared a state of emergency for Tokyo and three neighboring prefectures.

The state of emergency has since been expanded and now covers 11 prefectures.

After the Diet session ended, Edano met with reporters and said: “There was not a single positive response from the prime minister. It is regrettable because I presented him with the opportunity to naturally express an apology.”

(This article was compiled from reports by Ryo Kiyomiya and Go Kobayashi.)