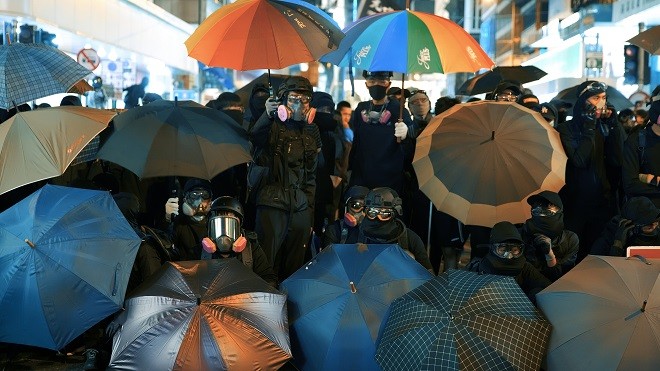 "Montage of Hong Kong" runs for only 28 minutes, but in that brief span it takes viewers on a roller coaster ride of the pro-democracy protests that gripped the world from 2019 to 2020 when activists took to the streets of the free-wheeling territory.

Even though the documentary is without commentary or narration, its silent scenes of young people expressing resistance and anger to China's policies are riveting.

"I wanted to compress time and space to make it a film that conjures up images of a mural," said director Ikuma Horii.

The genesis for the film lay in an encounter that Horii had with protesters when he and his film crew visited Hong Kong in October 2019 to shoot scenes for a commercial. Protests were being organized at the time to oppose an extradition bill that could have sent suspects to mainland China to face trial.

"They were all young people." Horii said. "About 20 percent of participants referred to as the brave fighters were women. I wanted to know what they were thinking, so I started rolling the camera, carried away by the excitement."

After returning briefly to Japan, Horii went back to Hong Kong with producer Hotaka Maeda, a longtime acquaintance, to shoot footage from November to the start of the year.

Not knowing what would happen when and where, they were sometimes sent down blind alleys due to misinformation and undercover operations by police. But they never stopped the camera from rolling, even when they were sprayed with tear gas or targeted by water cannon.

The pair conducted loads of interviews and ended up with 40 or 50 hours of recorded footage. Through careful editing, they managed to document the events of a single day.

The documentary lays bare the complex realities of Hong Kong. In response to police violence, the protesters are captured going on a rampage of vandalism through the city's streets.

Amid all the mayhem, Hong Kong's citizens are exposed to risk regardless of whether they support the pro-China camp or the pro-democracy activists.

"Violence committed by both the pro-democracy camp and police had to be shown equally," Horii insisted. "I didn't want to make a film based on ideology. I don't think it is a good idea to use cinema as an instrument that divides society."

"I feel sad to see how freedom of speech was lost after so many young people made sacrifices in their attempts to change the world," the director said.

"I think the person wanted to say that freedom can be lost imperceptibly over time and it is too late when you realize it is lost," Horii said. "Their freedom is being taken away, but I think it is meaningful to (give audiences the opportunity to) face the reality."