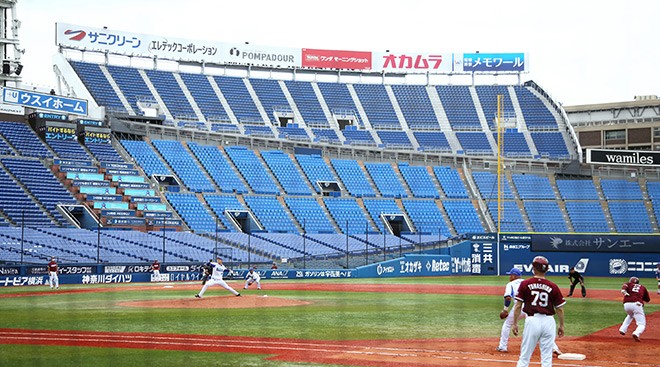 Yokohama Stadium is the planned venue for the baseball and softball competition at the Tokyo Olympics. (Asahi Shimbun file photo)

The head of the Tokyo Medical Association is urging the government to consider holding the Tokyo Olympics this summer with no spectators in the stands.

Haruo Ozaki made the comments in an interview with The Asahi Shimbun in mid-January.

The 2020 Tokyo Olympic and Paralympic Games were postponed for a year due to the novel coronavirus pandemic.

Under the current plan to host the Games, about 10,000 doctors and nurses would be stationed at the various venues and nearby locations to offer treatment for athletes and fans.

Most of the personnel are to be provided by the Tokyo Medical Association and that medical structure would not be possible without the association’s cooperation.

Tokyo's medical structure is already under tremendous strain due to the prolonged period of the pandemic, Ozaki pointed out in the interview.

Medical clinics have also been burdened with providing polymerase chain reaction and other tests and monitoring COVID-19 patients who are resting at home because of minor symptoms or because they are asymptomatic.

“I believe we should abandon the idea of holding a once-in-a-century extravaganza and inviting people from around the world to Tokyo,” Ozaki said.

But at the same time, he said he sympathized with the perspective of athletes that the Games should go on and called for eliminating the audience to hold them more safely.

“When we think about the athletes, the Games should be held," Ozaki said. "The basic objective of the Olympics is to have athletes gather in one place for competition. If that's considered the objective, discussions should begin about holding the Games without spectators.”

Japan's state of emergency over the novel coronavirus pandemic now in place for 11 prefectures expires on Feb. 7.

Yasutoshi Nishimura, the state minister in charge of economic revitalization, who also heads the central government’s efforts to deal with COVID-19, has said that one benchmark for lifting the state of emergency for Tokyo is having the number of new cases held under about 500 per day.

“Under the current measures being implemented, Tokyo will not likely reach that level until the end of March,” Ozaki said. “I have doubts as to whether we can enter into talks about cooperation regarding the medical structure for the Olympics from April.”

He added that it might be possible to provide cooperation from hospitals and medical clinics if no spectators were allowed because that would mean volunteers for the Olympics would not be needed to handle the fans and there would be no need for the volunteers to be vaccinated.

“If the central government really wants to hold the Olympics, it should present a specific road map that sets out goals for how much new cases need to be decreased and by when,” Ozaki said. “Even if it says it will overcome the novel coronavirus, holding the Olympics would become meaningless if new infections spread again after the Games are over.”