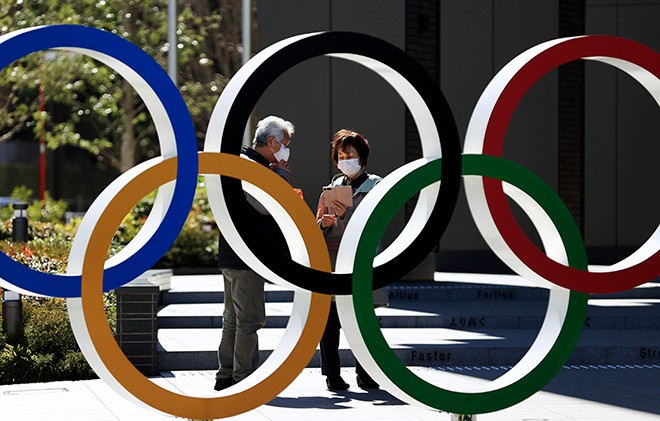 Despite growing calls for Japan to either cancel or again delay the Tokyo Games, government and Olympic officials have pressed ahead with preparations, including devising various scenarios for spectator numbers during the pandemic.

The spread of the novel coronavirus last year postponed the Tokyo Olympics and Paralympics to summer 2021, and sources said the International Olympic Committee has asked for several alternatives concerning fan attendance at the event.

But during Diet questioning on Jan. 20 and 21, opposition lawmakers urged Prime Minister Yoshihide Suga to cancel or postpone the Olympics again.

Kazuo Shii, head of the Japanese Communist Party, pointed to the possibility that COVID-19 vaccinations would not spread to all nations in time for the Olympics. He also noted the difficulty of dispatching large numbers of medical personnel for athletes and fans at the Games.

“The holding of the Games this summer should be canceled, and all efforts by Japan and the world should be focused on controlling the novel coronavirus pandemic,” Shii said at the Jan. 21 Lower House plenary session.

Suga, however, said preparations were continuing to hold the Olympics in a safe manner even without the precondition that vaccines would be widely available in time for the event.

Officials from the central government, the Tokyo metropolitan government and the Olympic organizing committee have come up with three options regarding spectator numbers at the venues. The alternatives are: no limit, 50 percent of capacity, and no fans.

Sources said the central government plans to decide on which alternative to go with by the end of March.

Some sources said the idea of allowing in spectators from abroad should be abandoned even before spring, given the continuing increase in new COVID-19 cases.

However, central government officials want to use the Olympics as a catalyst for recovery in inbound visitors to Japan. They have started developing a system using smartphone apps and facial recognition technology to detect and monitor infected people.

The Tokyo Olympic organizing committee is continuing its preparations on the presumption that no restrictions will be placed on the number of spectators. It is also considering the creation of a computer system that would only handle ticket sales for 50-percent capacity.

The “zero spectators” option would ease the burden on the government to implement infection-prevention measures at the Olympic venues. That alternative could be chosen as late as June, sources said.

But if no fans are allowed into the stands, Tokyo Olympic organizers would lose around 90 billion yen ($869 million) in ticket revenues. Government outlays would be required to cover the shortfall.

Various public opinion polls show the vast majority of voters want the Tokyo Olympics to be canceled or postponed a second time.

Even Ichiro Matsui, the Osaka mayor who heads Nippon Ishin (Japan Innovation Party) and is considered an ally of Suga, said on Jan. 20 that negotiations should be held with the IOC about holding the Olympics in 2024 in Tokyo, given the impossibility of vaccinating everyone in Japan by this summer.

But Suga is apparently banking on the Olympics to prop up the plummeting approval ratings for his Cabinet mainly over his handling of the COVID-19 health crisis.

If he were forced to postpone the Olympics, Suga would have to redo his political strategy regarding a Lower House election that must be held by this autumn.

(Go Kobayashi contributed to this article.)