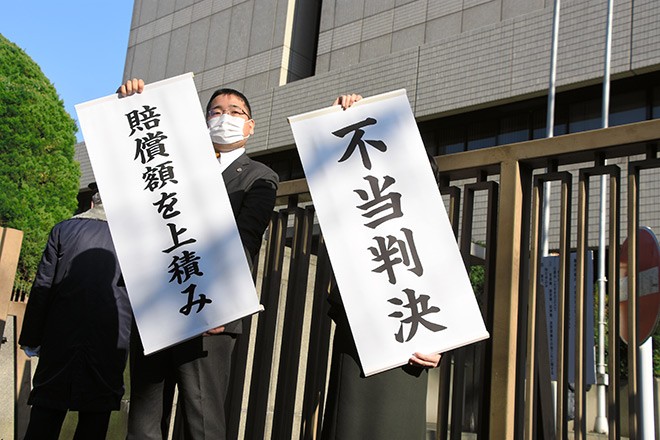 The Tokyo High Court finds the state not liable for the 2011 Fukushima nuclear power plant accident. A legal team member for the plaintiffs holds up a sign stating, “It is an unjust ruling,” in Tokyo on Jan. 21. (Kazufumi Kaneko)

The Tokyo High Court has ruled the government should not be held responsible for the 2011 Fukushima No.1 nuclear power plant accident and be forced to pay compensation to evacuees.

Residents who evacuated to Gunma Prefecture due to the accident claimed damages against the government and Tokyo Electric Power Co. (TEPCO). But according to the Jan. 21 appellate ruling, the court found the state was not liable and ordered only TEPCO to pay compensation.

That followed a lower court ruling by the Maebashi District Court that found both parties liable.

The Tokyo High Court also raised the total compensation from about 40 million yen ($386,160) for 62 plaintiffs in the lower court ruling to about 120 million yen for 90 plaintiffs.

But the plaintiffs’ lawyers criticized the ruling afterward, contending the court was led astray by the government’s "phony" line of argumentation, and said the increase in compensation still falls far short of the “complete compensation” their clients deserve.

There are about 30 class action suits nationwide filed by evacuees and others over the triple meltdown at the nuclear power plant. Out of 14 lower court rulings, the state was held responsible in seven cases.

The higher court appellate ruling was the second such case since the Sendai High Court ruling last September. But the Sendai court held the state responsible. The rulings were divided both at the lower and higher court levels.

The main issue of contention in this latest ruling was the credibility of a long-term evaluation report, prepared by the government’s Headquarters for Earthquake Research Promotion in 2002.

The Maebashi District Court found the evaluation to be credible in establishing liability. The report suggested the possibility that an 8.2-magintude earthquake and tsunami could occur off the coast of the Tohoku region.

But on the other hand, the Tokyo High Court did not find the evaluation to be credible at establishing liability, partly because it differed from the perspective given by a civil engineering society at the time.

“We can’t say that the occurrence of the tsunami was foreseeable based on the long-term evaluation,” the court said.

Furthermore, the higher court said, “You couldn’t have avoided the accident even if preventative measures were taken based on the long-term evaluation.” That is because there was a big difference between the size and type of the tsunami risk calculated by TEPCO based on the evaluation and the actual tsunami that hit.

The higher court concluded that the government was not acting in a significantly unreasonable manner by not invoking its regulatory authority to order TEPCO to take preventative measures.

Meanwhile, the higher court did find TEPCO responsible, and said that the “plaintiffs’ interests to lead their peaceful daily lives were infringed upon due to the accident.”

The Maebashi District Court had ordered TEPCO to pay 38.55 million yen to 62 out of 137 plaintiffs. But the higher court evaluated their areas of residence prior to the evacuation on a case-by-case basis, and therefore increased the overall amount to about 120 million yen for 90 plaintiffs, with payments to individuals ranging from 70,000 yen to 14.94 million yen.

After the higher court ruling, the legal team for the plaintiffs issued a statement disapproving of the logic behind the ruling.

“The court was tricked by the government’s phony argument and put more importance on the civil engineering evaluation--which was nothing but the standard within the industry--than the long-term evaluation.”

“The ruling was the exact opposite of the Sendai High Court decision,” Izutaro Managi, a lawyer for the plaintiffs, said at a news conference. “The reason why the court did not admit the foreseeability (of the tsunami) is the worst of all the rulings so far.”

(This article was written by Wataru Netsu and Jun Miura.)