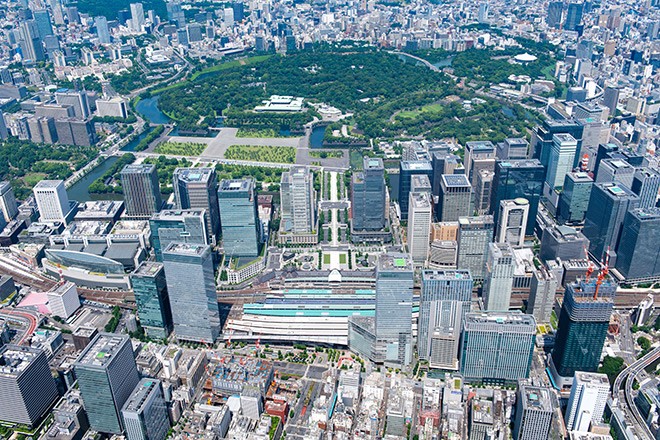 Mitsubishi Estate Co. will switch to renewable energy sources for all the electricity used in its office buildings in central Tokyo by March 2023, the company announced on Jan. 21.

Real estate firms are aiming to boost the competitiveness of their office buildings by promoting the use of renewable energy at office spaces amid growing environmental awareness among tenant companies and organizations.

The leading real estate company will have 18 buildings in Tokyo’s Marunouchi business district and the Yokohama Landmark Tower run on power from the sources in fiscal 2021, which starts in April. All the other buildings the firm owns in the Marunouchi district will follow suit by the end of fiscal 2022.

Mitsubishi Estate estimates that it can slash about 180,000 tons of its carbon dioxide (CO2) emissions, or roughly 5 percent of the group companies’ overall CO2 emissions, in fiscal 2021 alone.

Mitsui Fudosan Co., another major real estate firm, plans to provide electricity derived from solar energy at the Tokyo Midtown Hibiya and other buildings it owns or rents out in the greater Tokyo metropolitan area starting in April.

Environmental awareness among businesses has been rapidly growing since the government announced its goal of achieving net zero carbon emissions by 2050.

Preliminary Environment Ministry figures show the sector including business operations, such as for office buildings, generated 192 million tons of CO2 emissions in fiscal 2019, accounting for about 17 percent of Japan’s total emissions.