Nagasaki rally declares the beginning of end of nuclear arms 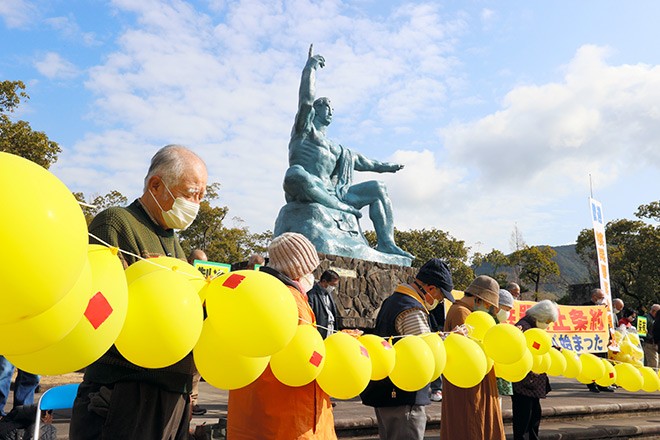 A rally is held in front of the Peace Statue in Nagasaki to celebrate the U.N. treaty banning nuclear weapons going into force on Jan. 22. (Jun Kaneko)

Hibakusha and others celebrated the Treaty on the Prohibition of Nuclear Weapons coming into force, a long, sought-after goal. Participants vowed to make Jan. 22 “the day to begin the end of” nuclear weapons.

Members of an association of residents in Nagasaki Prefecture who led the Appeal of the Hibakusha campaign in the city to urge all nations to join the treaty were on hand.

“Today is the start of the second stage, and our residents and the hibakusha in Nagasaki have to make efforts to make more nations ratify the treaty,” said Masao Tomonaga, 77, a co-leader of the association. “It is time for residents to charge themselves up and work to end nuclear weapons.”

A petition drive organized by survivors of the 1945 atomic bombings of Hiroshima and Nagasaki urging all nations to sign the U.N. treaty banning nuclear weapons collected more than 13 million signatures.

The signatures, submitted to the United Nations in early January, included more than 500,000 gathered from Nagasaki Prefecture.

The treaty was ratified by more than 50 countries in the three and a half years since the U.N. General Assembly adopted it in 2017.

It is estimated that there are about 13,000 nuclear warheads around the world.