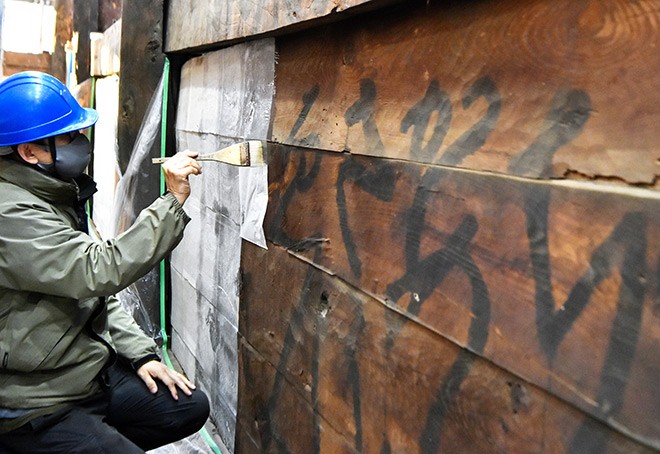 A man works to preserve graffiti scribbled on the wall inside the main hall of Gankoji temple in Mitake, Gifu Prefecture, on Dec. 8, 2020. (Noboru Tomura)

The graffiti was found scribbled on the wall behind a Buddhist alter inside the main hall of Gankoji temple in Mitake, Gifu Prefecture, in 2020.

The main hall, which was rebuilt in 1581, is designated by the government as a national important cultural property. The agency said the graffiti should be also preserved as part of it.

The temple, which has been under renovation since 2017, plans to keep the graffiti visible from outside.

The temple believes the graffiti was written by travelers passing through Tosando, one of the main routes in feudal times connecting the then-capital and countryside, as they stopped at the popular temple on their way.

The graffiti includes names of places and people written in ink.

It includes many poems, one of which reads, “I want this brushstroke to be my keepsake if I die somewhere.”

Yoshitaka Mikami, a professor at the National Museum of Japanese History who specializes in ancient graffiti, said the poems and graffiti discovered at the temple were typical for the time.

From the late 16th century to the early 17th century, people would go on a pilgrimage to temples around the country and leave poems, known as “katamikatami,” that included their names and places of residence.

“Graffiti at the time was part of a religious practice,” Mikami said. “People back then did not think graffiti was an ethical no-no, like we do today.

“They left graffiti in memory of their visit, like hostel guests today write a message in a guestbook.”

Toimi Uchiyama, who heads the on-site office of the Japanese Association for Conservation of Architectural Monuments and oversees the temple’s renovation work, said, “The fact that there is so much graffiti in a recess inside the main hall is because the area was under construction at the time and remained unpartitioned.”

The section was veneered around 1610, and no graffiti was written afterward in the area, Uchiyama said.

The current renovation work on the main hall is expected to be completed by the end of January.

The walls where the graffiti is scribbled have been removed and are now protected by special paper and kept in storage.

Kurosaka said it is good that the temple plans to make the graffiti available for public viewing.

“It will be attractive historical material, assuming that the temple can also take care of its conservation.”