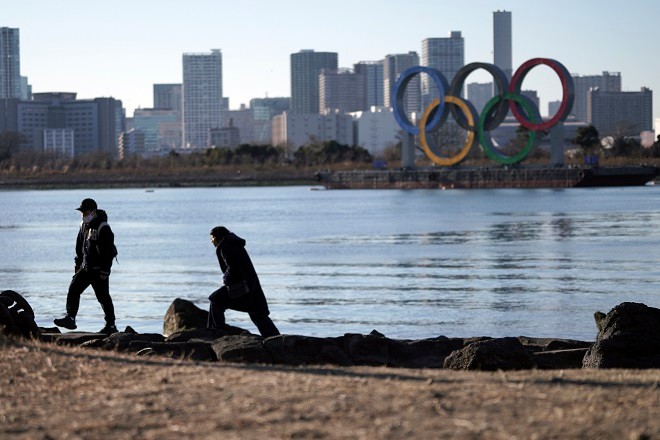 A couple stroll near the Olympic rings located in the Odaiba waterfront section of Tokyo on Jan. 20. (AP Photo)

“We have, at this moment, no reason whatsoever to believe that the Olympic Games in Tokyo will not open on the 23rd of July in the Olympic Stadium in Tokyo,” International Olympic Committee Chairman Thomas Bach told Kyodo News on Jan. 21. “There is no Plan B.”

I could hardly believe what I was hearing. I mean, how could Bach seriously expect anyone to believe that the only plan he's ever had was Plan A, even while the COVID-19 pandemic kept surging?

The New York Times last week reported that doubts had arisen within the IOC about the Games being held this summer. The story said the IOC “may be forced to cancel the Olympics for the first time since World War II.”

And The Times of London reported Jan. 21, “The Japanese government has privately concluded that the Tokyo Olympics will have to be canceled because of the coronavirus, and the focus is now on securing the Games for the city in the next available year, 2032.”

And of course, the Japanese government is vehemently refuting the report.

Prime Minister Yoshihide Suga, who has repeatedly insisted that the Games will be held “as proof of mankind's triumph over the coronavirus,” remained adamant even when he was asked in the Diet, “Aren't you prepared to consider Plan B?”

Top officials of the Suga administration, including the Olympics minister herself, continue to spout trite expressions such as, “We must remain single-hearted” and “Japan must live up to its responsibility as a mature nation.”

Having covered summer and winter Olympics, including the 2004 Athens Olympics, I have learned a few things.

For one, there were numerous healthcare professionals standing by at every event venue for potential accidents and sudden health problems.

I understand that more than 10,000 doctors and nurses are to be mobilized during the Tokyo Olympics. But given how overwhelmed the medical system already is in the greater Tokyo area, a sense of dread is all I feel.

Moreover, even if the Games are to be held as scheduled, there is no telling how many athletes--the real stars of the show--will be turning up in Tokyo. If athletes from around the world are hesitant to come, the event will hardly live up to the “dream festival” it is supposed to be.

One scenario I am sick and tired of is to see the prime minister stubbornly stick to his Plan A, only to find himself up a tree and scrambling to move to Plan B.

That was exactly how he suspended the “Go To” campaigns and issued a state of emergency in early January.