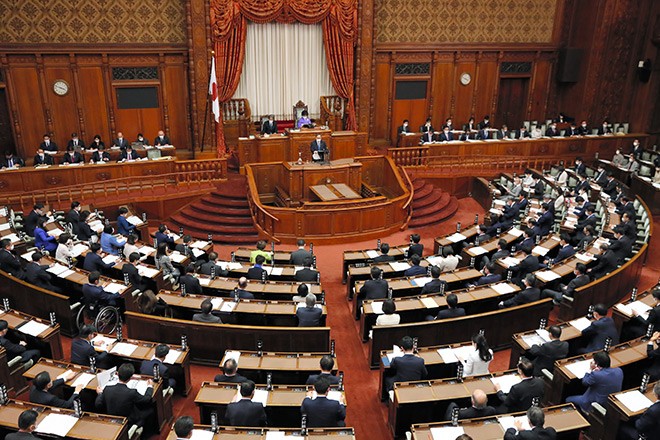 The Cabinet approved a bill to amend legislation on measures to fight the COVID-19 pandemic.

The government is hoping the proposed changes will pass the Diet as early as possible during the current session.

Containing novel coronavirus infections is certainly the most urgent task facing the political community right now. The proposed amendments raise many questions with regard to their content and effectiveness, as well as the process of decision-making.

They are expected to have profound consequences for the rights of individuals, which could have all sorts of repercussions for society.

The Diet should scrutinize, across party lines of the ruling bloc and opposition camp, what the bill envisages and try to settle any problems.

The bill is consistent in its basic thinking that the authority of public administrative bodies should be strengthened and noncompliant individuals and businesses should be brought forcibly under their control by means of punishment.

The proposed changes to the Infectious Diseases Prevention Law, for example, contain a provision that prefectural governors would be authorized to request those who are recuperating at their homes or at hotels to “help,” for example, by not leaving their premises.

The governors would be authorized to “recommend” hospitalization to those who refuse to comply with such a request. Noncompliance could lead to imprisonment for not more than one year or a fine.

The National Governors’ Association is pressing for more effective measures, citing the examples of some infected patients who discharged themselves from premises where they were recuperating, be it at hospitals or elsewhere, without permission.

It is, however, conceivable that some of those people had legitimate reasons for doing so. We are left to wonder if lumping all such cases as subject to criminal punishment serves the interests of justice or would even prove to be effective.

The government has yet to provide a convincing explanation on the number of such cases to date or the harmful consequences they had.

Any proposal to establish a law must be based on legislative facts, or social, economic and scientific evidence that substantiates the reasonableness of the legislation. The process of making a law requires careful deliberations. That is even more true when the law in question is intended to restrict the freedom of individuals and penalize violations.

The government abruptly presented an outline of the proposed law changes just two weeks ago during talks between the ruling and opposition parties in response to the surge in COVID-19 cases.

It remains unclear what government officials have in mind in response to concerns that recourse to penalty-oriented legislation could motivate more people to evade infection tests or try to conceal the fact of their infections.

The bill to amend the Law on Special Measures for Pandemic Influenza and New Infectious Diseases Preparedness and Response, which was approved by the Cabinet on the same occasion, is also riddled with problems.

The proposal is certainly a step toward providing assistance measures for businesses that comply with requests for shortened business hours and shutdowns, but the specifics of the measures remain vague.

The proposed changes include a provision for establishing a new arrangement called “intensive measures for preventing a spread” of the virus, which would allow private rights to be restricted, under the threat of punishment, even before a state of emergency is declared.

But the terms and conditions for invoking such drastic measures remain ambiguous. As it stands, the government bill is unacceptable.

Prime Minister Yoshihide Suga told the Diet, “We will continue to hear the views of the ruling and opposition parties.”

The government should begin by sincerely answering the multitude of questions that have arisen. That should be the starting point for in-depth discussions on the matter.