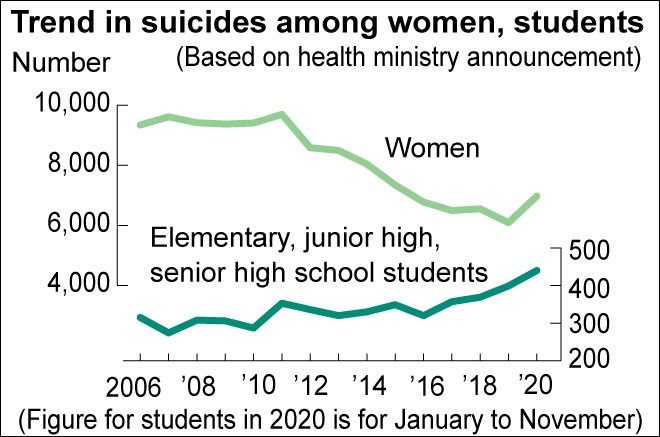 Groups manning hotlines dedicated to talking people out of committing suicide found their phones ringing off the hook in 2020.

So, it came as no surprise to them that a Jan. 22 report on suicides across Japan last year registered the first increase in 11 years.

The primary culprit for the surge, particularly noticeable among women, was emotional and financial stress caused by isolation as the nation fought to contain the spread of the COVID-19 pandemic.

Lifelink, a nonprofit organization working to prevent suicides, operates social media accounts that allow anyone to post messages about their problems.

It reported about 3,000 consultations in March, but in September, after the second wave of the pandemic hit, the figure rose to 15,000. About 70 percent of those sending messages were women.

Figures for suicides nationwide in 2020 showed a 14.5 percent increase among women.

“I am being physically abused by my husband. Nothing changes even if I put up resistance. The only alternative is to die,” read one message received by Lifelink.

Health ministry officials analyzing the causes of suicides for the period between last January and November, noted there was a 58.2 percent increase in suicides among women in their 20s and 30s due to economic and lifestyle problems.

Requests from local governments to refrain from going out were likely another factor as there were 390 cases in which the suicide was linked to feelings of isolation arising from a lack of opportunities to meet up with coworkers, friends and family members.

“Many suicides are triggered by a chain reaction among a number of different factors,” noted Yasuyuki Shimizu, who heads Lifelink.

Women and young people are deemed to be particularly vulnerable if they lose their main source of income or face domestic violence, he said, adding that  media reports about suicides of celebrities were likely a contributing factor.

Shimizu called on local governments to more actively provide information about support measures available to women and young people who may not be aware of such programs.

The record number of suicides among elementary, junior high and senior high school students was also closely tied with the COVID-19 crisis.

Childline Support Center Japan, which operates telephone consultation services for young people, noted a sharp decrease in calls about bullying, but an increase in young people feeling depressed or facing problems at home because parents were working remotely.

Between March and October, the group received a 4.6-fold increase in calls from young people hinting they wanted to end their lives.

Junko Kobayashi, who heads the group, called on adults to pay more attention to their children and listen to what they have to say.

She noted that the pandemic had sharply reduced opportunities for young people to go out, depriving them of a meaningful outlet to have contact with others of the same age.

Lifelink’s Shimizu urged the government to provide more consultation services for those in distress because the private-sector support groups were now operating at capacity.

(This article was written by Kyosuke Yamamoto and Haruna Ishikawa.)