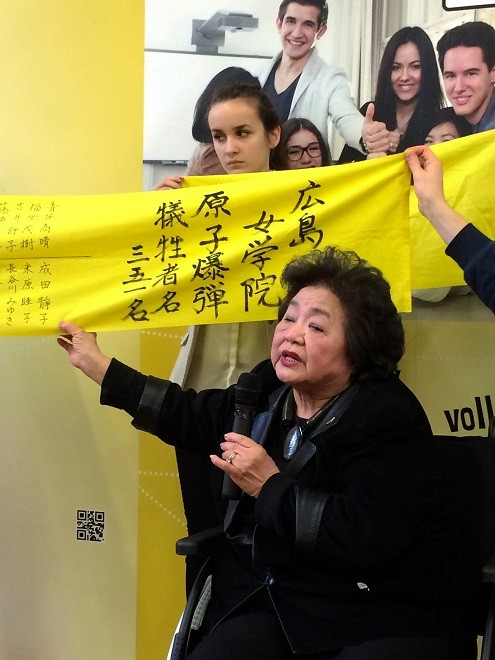 This scene from the movie captures Setsuko Thurlow talking about her experiences of the atomic bombing of Hiroshima under a banner that carries the names of all her classmates who were killed. (© Not Just A Survivor Film LLC)

HIROSHIMA--Setsuko Thurlow, a revered figure in the anti-nuclear movement, marked Jan. 22 with the release in Hiroshima of a documentary film about her life and news that the Treaty on the Prohibition of Nuclear Weapons had taken effect, something she had long campaigned for.

The 89-year-old survivor of the atomic bombing of this western city who now lives in Canada is best known for her efforts on behalf of the International Campaign to Abolish Nuclear weapons (ICAN).

Another female expat from Hiroshima who lives in the United States helped make the movie, which is interspersed with episodes of her own family members, also hibakusha survivors.

“The Vow from Hiroshima” runs for 83 minutes and was coproduced by Mitchie Takeuchi, a 65-year-old consultant who lives in New York. The film was helmed by American director Susan Strickler.

Shooting for the film began around the time of the 2015 Review Conference of the Parties to the Treaty on the Nonproliferation of Nuclear Weapons. The film camera followed Thurlow as she hopped from one country to another to give accounts of her A-bomb experiences.

One scene from the movie shows how the treaty, which defines nuclear arms as inhumane and illegal, was adopted in July 2017.

Another scene captures the moment ICAN, a global nongovernmental body that has been partnering with Thurlow, was named winner of the Nobel Peace Prize in autumn of that year.

The film also explores the roots of Thurlow’s activities.

It recounts, for example, how she received continued support from her husband Jim (James), who died 10 years ago, while she was giving compelling speeches at international conferences and elsewhere, and how her older sister and nephew were killed in the Aug. 6, 1945, attack.

The film was initially intended to focus on Thurlow’s life. But as shooting work continued, Thurlow and Takeuchi, both alumnae of the Hiroshima Jogakuin high school for girls in the city’s Naka Ward, grew close.

At one point, Thurlow encouraged Takeuchi to take a closer look at how members of her own family survived the A-bomb.

Takeuchi’s grandfather Ken, who died at 84 in 1974, was the inaugural president of Hiroshima Red Cross Hospital. He was exposed to the blast while in a hospital 1.5 kilometers from ground zero.

Takeuchi’s mother Takako, who was Ken's eldest daughter, entered the city to take care of her father, who fell unconscious at one point, and was exposed to radiation.

Part of the movie portrays how Takeuchi retraces the thoughts of her grandfather, who worked hard to rebuild the hospital, and of her mother who died 14 years ago. Hiroshima Red Cross Hospital was later merged with the Hiroshima Atomic-Bomb Survivors Hospital.

Thurlow actively recounted her A-bomb experience outside of Japan for more than six decades. Takeuchi, a fellow expat, previously seldom thought of herself as a second-generation A-bomb survivor. The personal histories of the two women cross in the film.

Strickler said the narrative structure is intended to show that anybody can become engaged in a campaign against nuclear weapons, at any moment in life, if only there is a motivation. She expressed her hope that the movie will generate interest in the campaign because it is about personal, not political, stories.

Thurlow and others gave remote “stage” speeches during a preview of the film for media representatives in Hiroshima’s Naka Ward on Nov. 25. Thurlow expressed happiness about the completion of the movie, which she said “will allow messages to be conveyed to more people.”

“Let us go forth together, step by step, every day in the conviction that, by making concerted efforts, we can change and move the world,” she said. “I will also work hard as long as I am alive.”

The film won official recommendation from the Advisory Council on Children’s Film Viewing of Japan’s Film Classification and Rating Organization on Dec. 18.

The film is scheduled to be screened across Japan. It will be released at the Eurospace movie theater in Tokyo’s Shibuya district in April.

(This article was written by Risako Miyake and Sonoko Miyazaki.)