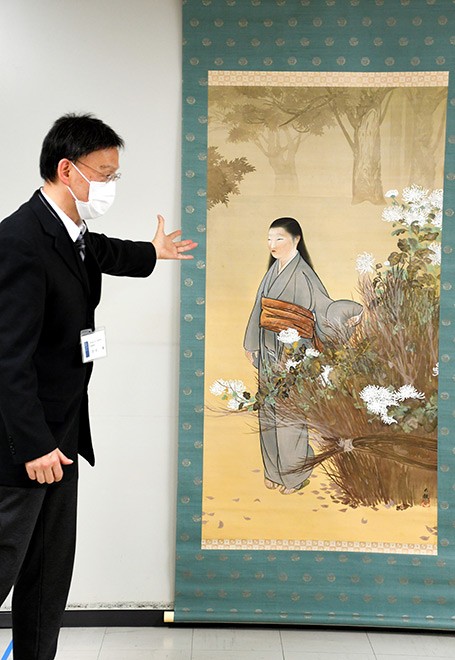 SAPPORO--A long-lost hanging scroll by Taikan Yokoyama that was found in a private home will go on public display at the Hokkaido Prefectural Art Museum here from April.

SAPPORO--A long-lost hanging scroll by Taikan Yokoyama that was found in a private home will go on public display at the Hokkaido Prefectural Art Museum here from April.

Yokoyama (1868-1958) is highly regarded as a leading figure in modern Japanese-style painting.

"Pondering Autumn," an early work, was donated to Hokkaido on Dec. 17.

“It was executed during a period when Yokoyama was exploring ways to express abstract ideas,” said Makoto Tomana, curator and deputy director of the museum. “It is an important piece for Japanese art history as it shows innovation and a turning point in Japanese-style paintings, such as facial expressions and art styles.”

The silk scroll, which measures 158 centimeters by 82.5 cm, was created in 1898 when Yokoyama was 30 years old. It features the painting of a woman with a melancholic look against the backdrop of autumn scenery, drawn with pulverized mineral pigments.

It is regarded as an avant-garde work at the time because of its combination of Oriental and Western art styles.

The scroll went on display in 1898 at an inaugural exhibition hosted by the Nihon Bijutsuin (Japan Arts Institute), which Yokoyama was instrumental in founding.

But it went missing after the exhibition until it was found in a private home around 20 years ago.

It came to light in unusual circumstances, recalled Sumiko Ueda, 97, whose son Hidetaka, 75, runs lumber company Ueda Mokuzai in Sapporo. She explained that she was organizing a storehouse when she came across the hanging scroll and its box in one corner.

When the family had the piece appraised by an expert, it was confirmed to be a work by Yokoyama. It is believed that Hidetaka’s great-grandfather purchased the scroll during the 1930s.

According to the art museum, the scroll was unveiled to the public for the first time at a retrospective devoted to the painter held in Tokyo and Kyoto in 2018. Sumiko decided to donate it to Hokkaido as a gesture of thanks to her hometown.

The scroll will be housed at the museum, which already has another piece by Yokoyama in its collection.