EDITORIAL: Suga should listen to others, rally everyone to fight pandemic 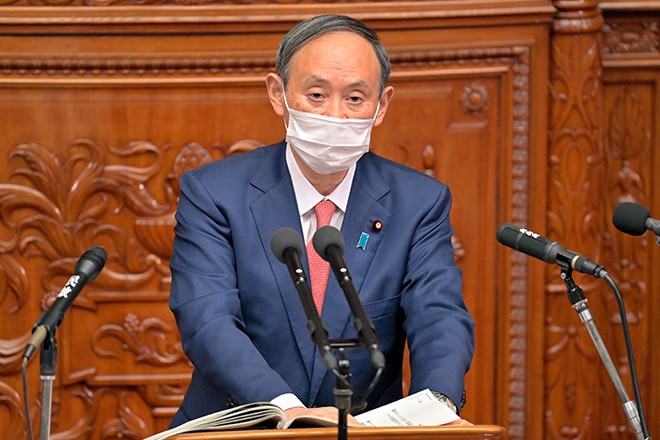 Prime Minister Yoshihide Suga responds to a question from Yukio Edano, head of the Constitutional Democratic Party of Japan, during a Lower House plenary session on Jan. 20. (Kotaro Ebara)

Prime Minister Yoshihide Suga’s blunt Diet responses, reiterating the same old explanations, have failed to convey any determination or enthusiasm for safeguarding the lives and livelihoods of the people.

He should listen to the views of, and proposals by, opposition parties and take the initiative in a political drive for fighting the COVID-19 pandemic across all party lines.

The Diet has ended its schedule for having representatives of political parties question Suga on the policy speech that he gave when its ordinary session opened on Jan. 18. The biggest point at issue during the interpellations concerned the government’s handling of the coronavirus crisis.

Yukio Edano, head of the main opposition Constitutional Democratic Party of Japan, began by arguing that Suga was too slow in suspending the Go To Travel tourism promotion campaign in December and declaring a state of emergency for a second time in January.

“You should begin by admitting to the delays in your decisions and showing remorse,” Edano said in pressing the prime minister.

Suga only replied matter-of-factly, “I have kept a close eye on the state of infections and listened to the views of experts in making my decisions.”

He was all but saying there has been no problem in the government’s handling of the matter, which has, in fact, come under the critical eyes of the public.

It is often said politicians are responsible for the consequences. Any measures Suga will take and any remarks he will make in the coming days and months will hardly be perceived as convincing as long as he has yet to analyze and reflect on what has caused the recent surge in COVID-19 cases.

The CDP, the Japanese Communist Party, Nippon Ishin (Japan Innovation Party) and the Democratic Party for the People, all opposition parties, demanded a rewriting of the third supplementary budget proposal, which was worked out before the second state of emergency was declared and includes additional outlays for the Go To Travel campaign.

Given the spread of virus infections that has since occurred, it appears reasonable to change course now and focus more on providing assistance to health care and livelihoods.

Doing so, before everything else, would send a clear message that Suga’s administration is shifting from the pursuit of the double goals of the economy and lives to an emphasis on containing infections.

Suga, however, couldn’t have been blunter in his response on the issue. He only said that “sufficient funds had been set aside for fighting the coronavirus even without rewriting” the budget draft.

The Suga administration’s propensity to cling to its earlier policy decisions may have prevented it from taking flexible response measures, such as when it appeared reluctant to halt the Go To Travel campaign and declare a state of emergency.

The administration has inherited an out-of-touch approach to public sentiment from the previous government of former Prime Minister Shinzo Abe. That must be due to its inclination toward heavy-handed politics and an ensuing loss of pliability, which would have allowed it to carefully gather diverse public opinions.

The ruling parties have often labeled opposition parties as mere criticizers without counterproposals, but that is not necessarily the case.

Let us consider the proposed amendments to a special measures law for dealing with COVID-19.

Opposition parties submitted a bill for amending it to the Diet during its extraordinary session last year. It is the government and the ruling parties that closed the Diet session without taking the least notice of the bill and are rushing, only now, to have the law amended.

The Cabinet-approved government bill for amending COVID-19 laws, including the special measures law and the Infectious Diseases Prevention Law, is riddled with numerous questions, not the least the penalties that it envisages to introduce.

The government and the ruling parties should hold earnest talks with the opposition for modifying the bill if they want to win broad-based understanding and cooperation from the public.

Suga said, in opening his policy speech, that his goal is to allow the public to have “peace of mind” and “hope.”

If Suga has that in mind, he should stop his practice of monotonously reading aloud written answers that were prepared by bureaucrats and halt his signature, “I will refrain from replying to that” responses when he attends the question-and-answer sessions of the Diet Budget Committees starting on Jan. 25.

He should talk in his own words, which will touch the heartstrings of the public, in attending the debate there.