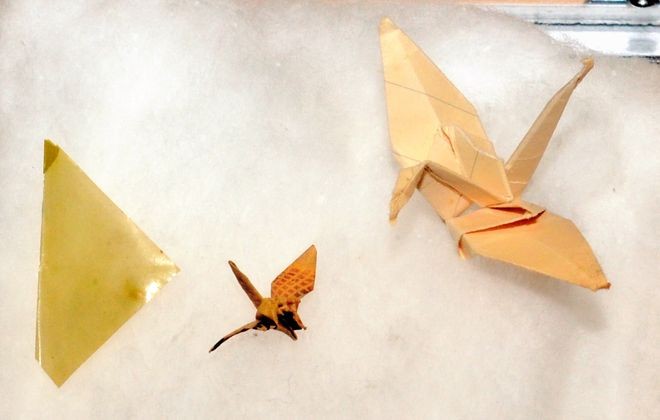 FUKUYAMA, Hiroshima Prefecture--Metallic reproductions of paper cranes folded by atomic bombing victim Sadako Sasaki are being developed as durable symbols of peace for distribution around the world.

Metal parts maker Castem Co., based here, embarked on the project to replicate origami cranes left behind by Sadako, who was exposed to radiation from the 1945 atomic bombing of Hiroshima when she was 2 years old and died of leukemia at age 12.

“They (paper cranes), along with the wishes of Sadako, will be revived,” said Masahiro Sasaki, 79, her elder brother. “We will work to spread the belief all over the world through the origami cranes that people should compromise with each other despite their differences.”

“As a company in Hiroshima Prefecture, we wanted to do something to help promote peace,” Toda told reporters that day. “We therefore suggested they (Sadako’s creations) be preserved for long periods as metal objects.”

Three days after Masahiro visited Castem, the Treaty on the Prohibition of Nuclear Weapons, which bans all activities involving the weaponry, came into force.

Sadako became famous for making more than 1,000 origami cranes while she was hospitalized to pray for her recovery. After her death, a monument modeled after Sadako was set up at the Hiroshima Peace Memorial Park.

Castem proposed to Masahiro and others that it would distribute Sadako’s origami works as “metal replicas to people around the globe” because of the limited number of her surviving paper cranes.

The company has produced and marketed models of pro baseball players’ gloves and other articles with its 3-D scanning technology. It will use the scanning technique to faithfully reproduce such details as creases and wrinkles in the paper cranes.

The metal cranes will be pitched as key rings, good luck charms, pins and other fashion accessories by Aug. 6, the 76th anniversary of the atomic bombing of Hiroshima.

“The products are not intended for commercial purposes,” said a Castem representative. “They will be made available at easy-to-purchase prices for anyone, and part of the proceeds will be donated.”