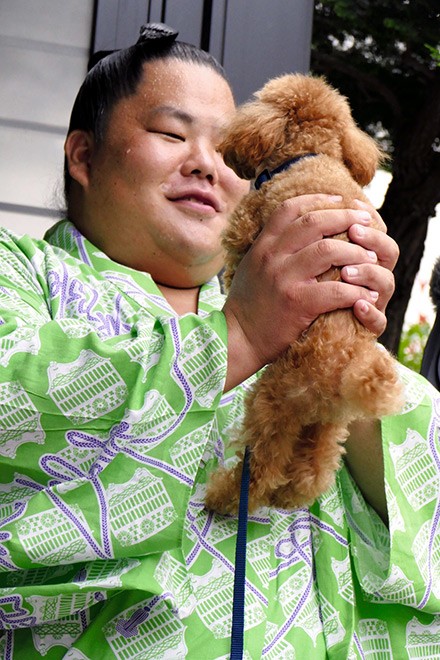 Daieisho plays with his toy poodle, Chiroru. (Provided by his family)

Growing up in a single-parent household, sumo wrestler Daieisho never shied away from telling others what motivated him.

“I want to make my mother’s life easy,” he would tell them.

On Jan. 24, the rank-and-filer also made his mother, Emiko, proud by notching his first championship in the top makuuchi division at the New Year Grand Sumo Tournament with a 13-2 record.

Daieisho, a maegashira No. 1, became the first wrestler from Saitama Prefecture to win the Emperor’s Cup on the final day of the 15-day tourney in Tokyo’s Ryogoku Kokugikan.

Afterward, Daieisho hefted the massive trophy in the awards ceremony.

“I was surprised to find that the Emperor’s Cup is so heavy,” he said with a smile in an interview after the tournament. “I am just so happy.”

Daieisho, 27, whose real name is Hayato Takanishi, first entered the dohyo in his hometown of Asaka, Saitama Prefecture, when he was an elementary school first-grader.

As a junior high school student, he attended a boys sumo club in Iruma in the prefecture, where he learned the basics of a powerful thrusting attack that he employed during the New Year tournament.

“Daieisho was the most obedient boy of all,” said Masao Nishizawa, 58, general manager of the club. “He had talent, and yet listened to advice and made an earnest effort.”

Daieisho already had his sights set on becoming a professional sumo wrestler at the time. Although he told others about his desire to help his mother, he never told her.

Daieishio doesn't fit the mold of what most people would imagine of a rough-and-tumble sumo wrestler.

His favorite flower is a sunflower. When he was in junior high school, he belonged to a gardening club and would delight in bringing home vegetables he harvested during club activities.

He loves a family restaurant in front of Asaka Station, calling it “the best restaurant in Japan” even after he became a highly paid wrestler.

The only indulgence he has ever allowed himself is having a pet dog at his parent's home. Emiko loves having such a kind-hearted and humble son.

Over the past year, Daieisho has made significant strides in the sumo ranks. He was promoted to sekiwake, the highest rank in his career, and earned two of the three special prizes the Japan Sumo Association gives to makuuchi division wrestlers on the final day of a tournament.

Despite his busy training and tournament schedule, he usually returns to his parent’s home a few times a year to spend time with his mother. However, he has been unable to see her in person during the COVID-19 pandemic.

As Emiko watched her son fight in the dohyo on the TV screen, one thing came to her mind.

“He doesn't need to do anything special for me,” Emiko said. “If Hayato wins a tournament, that will be the best gift for me.”

Daieisho responded to his mother’s wishes by clinching his first Emperor's Cup.

“I want to tell (my mother), ‘I did win a tournament,’” he said. “I guess I was able to do something nice for my parent.”

He will report his victory to his mother the next time he sees her.