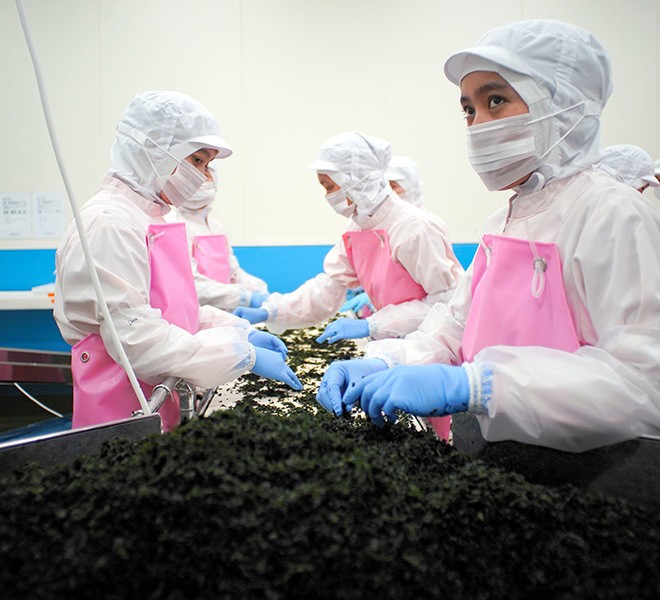 KESENNUMA, Miyagi Prefecture--Wataru Sugawara has done his part to make this city attractive to technical trainees from Indonesia, a population segment deemed vital for Kesennuma’s continuing efforts to revive from the 2011 tsunami disaster.

Sugawara, the 46-year-old president of civil engineering company Sugawara Kogyo, opened an Islamic house of worship in summer 2019 and established a next-door restaurant that does not serve pork.

But the number of trainees is still falling short of levels needed to prop up the depleted work forces in the city’s fishery and seafood processing industries.

The novel coronavirus pandemic has clearly affected the entry of technical trainees from overseas, but other factors are also behind the decline, including restrictions in the trainee program and the realization of such workers that there may be better opportunities in other countries.

That is bad news for places like Kesennuma, a city with a population of about 60,000, that have increasingly depended on foreign workers in terms of labor, local economy and vitality since the Great East Japan Earthquake and tsunami destroyed their communities in March 2011.

Sugawara also said that more people have reached middle-class status in Indonesia, which means the number of Indonesians coming to Japan to work has declined.

“Still, I want to make our town be chosen by them,” Sugawara said about opening the mosque.

The language classes in the city have proved popular among trainees.

“Kanji is difficult, but it is fun to remember them,” said a 22-year-old female trainee from Indonesia who has lived in Japan for three years.

The Miyagi prefectural government has also discussed a plan to open a Japanese language school to bring more interns to the area.

Miyagi Governor Yoshihiro Murai said the dwindling population is the biggest challenge for the coastal areas still recovering from the 2011 disaster.

“Having a migration of new people is very important,” Murai said.

With the falling birthrate and the graying of society, the nationwide working-age population, or those aged between 15 and 64, decreased by 6 percent over the past decade.

But in Iwate, Miyagi and Fukushima, the prefectures hardest hit by the quake and tsunami, the decrease was by 11 percent.

And the drop was even sharper in coastal areas, such as Kesennuma, increasing the communities’ dependence on foreign workers.

About 70 of the around 300 employees at Kawamura, a seafood processing company based in the Sanriku coastal region, are foreign technical trainees.

The company in 2018 established a joint venture in Indonesia as a place of employment for technical trainees who complete the program in Japan. One has already landed a job at the joint venture, the company said.

However, the plan has been hindered by the novel coronavirus pandemic.

With the harvest season for “wakame” seaweed about to start, the company is facing an uphill struggle to secure enough manpower.

Many companies and communities have faced a similar challenge.

Employers and experts have pointed out that rules in the central government’s technical trainee program have further complicated matters.

Under the program, foreign nationals can stay in Japan for up to five years under the name of “learning skills.”

The government has added a “special skill” category for visas in the revised Immigration Control Law. But the targeted trainees are not allowed to stay for more than five years in total, and they cannot bring their families to Japan.

“If we lose foreigners, we lose the community,” Kenju Kawamura, the 71-year-old president of Kawamura, said.

He is urging the central government to review the system and allow foreign technical trainees to settle in Japan.

And unfortunately for Japan, the competition to secure migrant labor has intensified.

A 20-year-old Vietnamese woman who works at a company in Ishinomaki, Miyagi Prefecture, said, “I want to go to South Korea next.”

Her net monthly salary is about 120,000 yen ($1,160). She keeps 20,000 yen for food and other living expenses and sends the rest to her family in Vietnam. She also has to pay back 1 million yen that she borrowed to come to Japan.

She said she has been looking for a better deal in neighboring countries.

The minimum hourly wage in South Korea is equivalent to about 820 yen. Japan’s minimum wage varies by prefecture. It is 825 yen an hour in Miyagi Prefecture and 793 yen in Iwate Prefecture.

In some prefectures in the Sanin, Shikoku and Kyushu regions, the rate is between 790 yen and 799 yen.

In South Korea, the central government handles the hiring process of foreign workers, eliminating the need for brokers.

The South Korean system is more appealing because foreign technical trainees in Japan have had to pay initial costs to brokers, some interns said.

“The central government also treats foreign workers as nothing but a supplementary labor force,” Saito said. “If this continues, foreigners will soon stop choosing Japan as a place to work.”

Saito is calling on the central government to allow foreign technical trainees to bring their families here and provide a wider range of visas “to create a society where they can live with Japanese and support each other.”