EDITORIAL: Suga has failed to sell the public on need to revise COVID-19 law 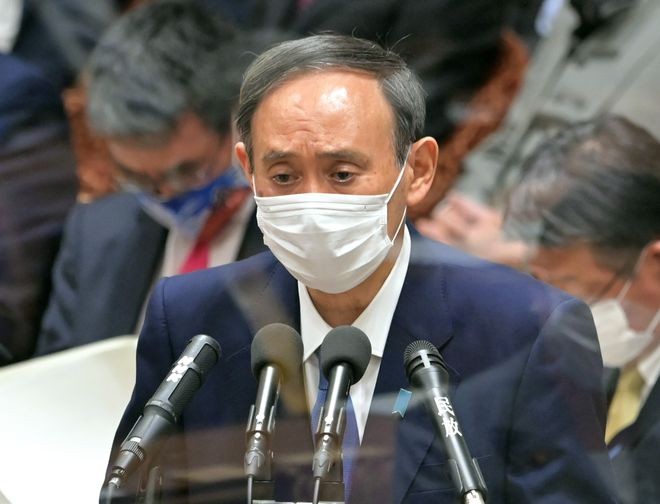 Prime Minister Yoshihide Suga at a meeting of the Lower House Budget Committee on Jan. 25 (The Asahi Shimbun)

The government is showing little interest in winning public support for its bills to enhance policy measures to stop the spread of the new coronavirus even though the proposed legislation would significantly affect people’s freedom and rights.

It has failed to make a detailed, compelling case for the proposed legal changes to dispel public concerns about the measure.

Prime Minister Yoshihide Suga’s government should respond flexibly to demands for revisions to the bills in the talks over the legislation between the ruling and opposition camps scheduled to start on Jan. 26. If the government does so, it will have an effective legal tool to combat the pandemic by gaining broad public understanding and support.

The Lower House Budget Committee session began on Jan. 25, offering the first opportunity in the current Diet session for lawmakers to ask questions about the government’s policies in a question-and-answer format.

Public attention was focused on answers given by Suga and other officials to questions about the bills to revise related laws for stronger policy responses to the public health crisis, which were recently approved by the Cabinet.

The opposition parties are focusing their criticism on provisions to introduce penalties for noncompliance with requests and instructions from authorities. The proposed revision to the Infectious Disease Prevention Law would mete out criminal punishment for COVID-19 patients who refuse to be hospitalized.

They can be imprisoned for up to one year or fined a maximum of 1 million yen ($9,600) under the proposed amendment.

Suga defended this proposal by referring to cases where patients left the medical institutions without permission and an emergency statement by the National Governors’ Association calling for such penalties.

But health minister Norihisa Tamura admitted the government had no accurate information about the number of cases where patients refused to be hospitalized.

Many of the people facing hospitalization must be concerned about possible effects on their jobs and their efforts to care for family members who need special care, such as aged parents or young children.

The proposal raises concerns that it could serve as a strong disincentive for people to see doctors and be tested and thereby hamper, rather than help, efforts to stem the spread of infections.

The government should put a higher priority on improving the COVID health care crunch, which is causing a growing number of patients to die while trying to recover at home as there are no hospital beds available for them.

The National Governors’ Association and some opposition parties have long called for revisions to related laws. But the government refused to listen, saying it would consider such steps after bringing the wave of infections under control and evaluating its policy responses.

However, it rushed to embark on legal changes under the pressure of necessity after it was forced to declare a state of emergency for the second time.

Suga, however, brushed aside criticism that the government had been too slow to respond to the deteriorating situation, pointing out that experts were divided over whether such stronger actions were necessary around the time of the autumn extraordinary Diet session.

Although Suga said that he will make the final decision and take responsibility for the results of policy decisions, he came across as trying to use requests from the governors’ association and opinions of experts as convenient justifications for the government’s decisions and actions.

The Suga administration appears to be forging ahead with its proposal to revise the laws with a determination to introduce legal penalties for noncompliance without trying to reflect on its performance so far and learn lessons from its past mistakes. This attitude will not help it gain public support.

Besides the provision to punish people who refuse to comply with requests and instructions from authorities, the bill to revise the special measures law to contain the COVID-19 pandemic also raises such important issues as whether the government should be allowed to restrict people’s rights even before a state of emergency is declared.

Another issue is what kind of support should be provided to businesses that shorten or close their operations in response to requests from authorities.

To build a broad public consensus on necessary legal changes, the government needs to do a better job of fulfilling its responsibility to explain during the Budget Committee session and talks with opposition parties over changes to the bill.