Virus-related deaths outside hospitals rise to 75 in January 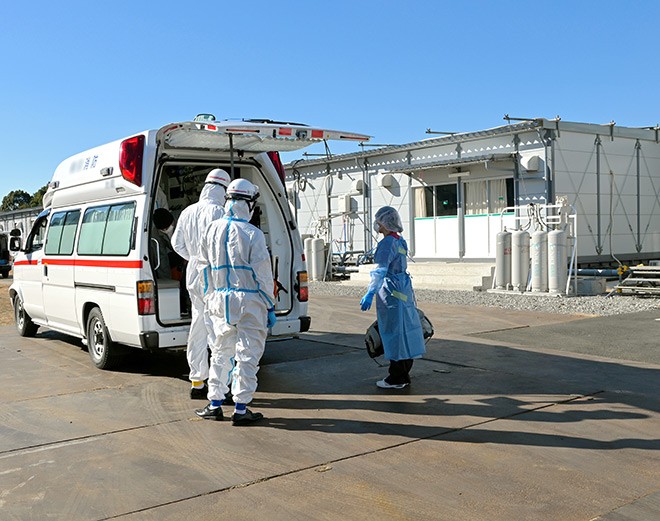 A COVID-19 patient whose condition worsened while recuperating at home is transported to a makeshift hospital in Kamakura, Kanagawa Prefecture, on Jan. 13. (Tokiko Tsuji)

Seventy-five people who died outside of medical facilities from Jan. 1 to Jan. 20 were infected with the novel coronavirus, including many believed to have been recuperating at home, the National Police Agency confirmed.

The number of such deaths has increased this month, the NPA said.

According to the NPA, 71 people were found dead at their homes, an elderly care facility, an accommodation center, among other places.

Four of them died after they went outdoors.

Twenty-seven had tested positive for the novel coronavirus before their deaths, while the other 48 were confirmed infected after police carried out PCR tests on their bodies.

The monthly number had remained under 10 until November, but in December, police confirmed 56 such cases.

In general, police conduct studies to determine the cause of death when the reason is not clear, except in cases in which a patient dies at a hospital.

COVID-19 can cause rapid deaths among patients by blood clots and sudden breathing difficulties, experts said.