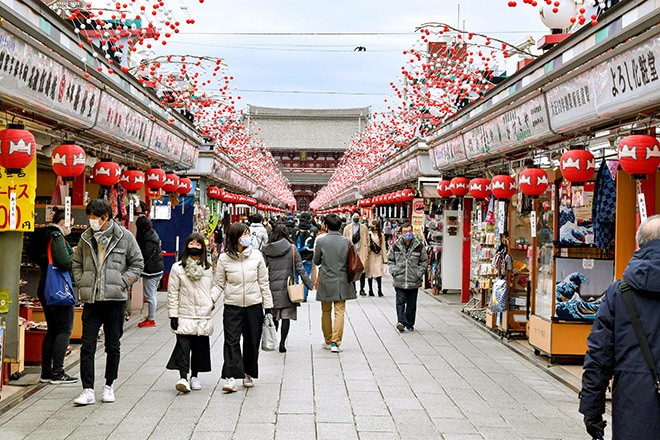 Far fewer pedestrians out and about on the Nakamise shopping street in Tokyo’s Asakusa district on Jan. 17, compared to levels seen before the COVID-19 pandemic (Noriyasu Nukui)

Tokyo has revised its contact-tracing strategy to prioritize outreach to higher-risk individuals affected by coronavirus, according to a letter sent by the metropolitan government to public health authorities last week.

The change comes as a third wave of the pandemic overwhelms Japan’s public health centers, which handle everything from tests and tracing to finding hospital beds.

Despite its early success, experts have warned that the country’s strategy to trace clusters of cases rather than conduct mass tests could face limits as virus cases surge nationwide.

Public health officials and doctors have lobbied for months for authorities to increase testing to ensure early detection and contain the spread of the virus.

Since infection cases began to rise in November, public health centre officials have asked to further narrow their contact-tracing efforts due to staffing shortages.

“Regarding epidemiological investigations, each public health centre will focus on finding out places and groups that contain people with higher risks,” said the Tokyo metropolitan government’s letter dated Jan. 22 seen by Reuters, referring to the elderly and those with pre-existing conditions.

Asked about concerns over scaling back efforts to trace the contacts of every person, Naomi Seki, an official at Tokyo Metropolitan Government’s health bureau, told Reuters the new policy would help public health workers cope with the rising number of coronavirus cases.