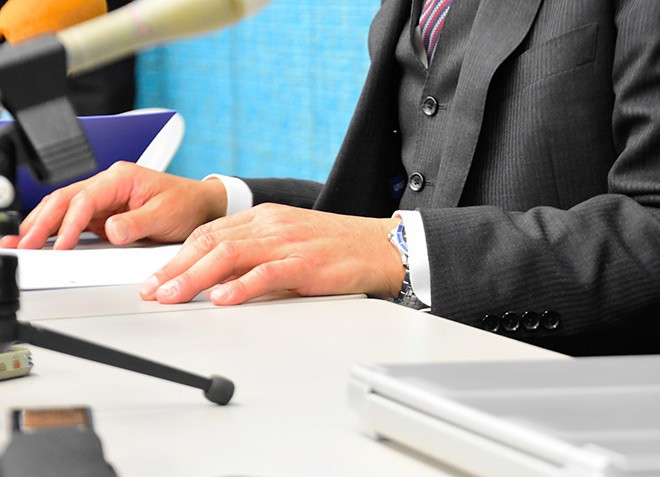 The father of a junior high school boy who killed himself in Otsu, Shiga Prefecture, speaks at a news conference in Otsu on Jan. 25 after the Osaka High Court’s decision was finalized. (Chifumi Shinya)

Two former junior high school students that bullied a classmate who took his own life in 2011 must pay 4 million yen ($38,600) in compensation to his parents, according to the Supreme Court.

In a decision dated Jan. 21, Japan’s top court finalized the Osaka High Court's ruling on the case, which had upheld a lower court decision but significantly reduced the compensation payment.

Tatsuya Ishida, a lawyer representing the plaintiffs, said the finalization of the ruling is significant because it recognizes the causal relation between bullying and suicide.

“Taking one’s life as a result of being bullied is no longer something that should come as a surprise,” he said at a news conference in Otsu on Jan. 25. “The ruling on this case will have wider ramifications for other lawsuits.”

The boy’s parents originally sought a total of 77.2 million yen in a damages suit they filed in 2012 against his classmates and the Otsu city government in Shiga Prefecture, which has oversight over the municipal school the victim attended.

The case attracted nationwide attention as school officials initially described the boy’s suicide as a result of a “quarrel” between the victim, 13, and the classmates, sparking a public outcry.

Later, it was revealed that the investigation into the boy’s death, led by school and city education officials, was fraught with errors, leading municipal authorities to agree to pay a settlement to the parents.

The incident prompted groundbreaking legislation, enacted in 2013, that requires schools to detect and report on bullying among students at an early stage.

In its 2019 ruling, the Otsu District Court ordered the defendants to pay a total of 37.5 million yen in compensation to the plaintiffs, recognizing their bullying caused the second-year student to commit suicide.

The district court said the boy developed a sense of despair as his classmates punched and kicked him, scribbled graffiti on his face and restrained him by covering his mouth with an adhesive tape and binding his hands and feet with cloth.

The court acknowledged that the amount the two former classmates should be ordered to pay under normal circumstances is 66 million yen, but it decreased the sum to 37.5 million yen, noting that the city government had agreed to pay a settlement to the parents.

The defendants appealed the decision to the Osaka High Court.

In its 2020 ruling, the high court, like the lower court, acknowledged that the former classmates were responsible for the boy’s death.

But it further reduced the compensation payment to 4 million yen on the grounds of comparative negligence on the part of the plaintiffs, while also stating that the defendants would under normal circumstances have to pay some 40 million yen.

“The parents failed to give their child the mental and emotional support” he needed when he was suffering, the high court said, referring to the couple’s separation at the time and the father’s use of violence against his son.

The top court's dismissal of the case followed the plaintiffs' appeal of the high court decision.

At the Jan. 25 news conference, the boy’s father made a fresh plea for the defendants to “take the court ruling seriously,” stressing that the two would have had to pay about 40 million yen in damages under ordinary circumstances.

“It is not too late, and they should face up to the crime they committed,” he said, adding he is hoping the latest ruling should lead to the eradication of bullying.

(This article was compiled from reports by Shunsuke Abe and Chifumi Shinya.)