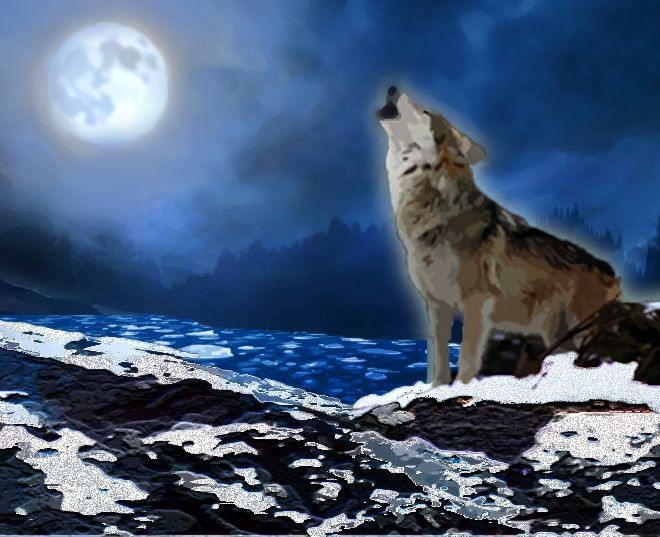 A pocketful of stars in a puddle
--John Hamley (Marmora, Ontario)

moonset
turning all
my pockets out
--Patrick Sweeney (Misawa, Aomori)

golden moon
with these thoughts of you
where will i go?
--Richa Sharma (Ghaziabad, India)

from behind face masks
seeing each other
eye to eye
--Roger Watson (Hull, U.K.)

winter moon--
at the crossroads
the sacrifice for Hecate
--Isabella Kramer (Nienhagen, Germany)

The haikuist alludes to a Greek goddess who kept evil from entering the front door in exchange for an offering of dinner on the last day of the lunar month. Wolves go hungry this time of year, notes Anne-Marie McHarg in London. According to the Canadian edition of the Old Farmer’s Almanac, in early British colonial times wolves howled from the crossroads to villages.

Howling wolf
Bites
Into the moon

A wolf was recently seen in Kall, Germany, running away from a hillside village of 70 people where Lothar M. Kirsch lives. The wolf has been quiet, so the news didn’t spread beyond the community, but the haikuist thinks “the wolf is too wise to announce his arrival in the Eifel Mountains.” The low mountain range is in North Rhine-Westphalia.

new snowshoes
the scrambled prints
of lynx and hare

Wolf moon
the silver trail
of a garden snail

A snowflake twinkles
on the elephant’s
eyelash

Lysa Collins’ highly recommended new haiku book, “A Breath of Africa” from Granville Island Publishing, shares dozens of one breath poems about her personal travel experiences with elephants and lions. Appended notes lightheartedly explain how a lion’s chuff is a noise like a big sniff, which is worrisome to hear from inside a cloth tent. Here’s a spine-tingler from the Okavango Delta.

year of the Ox
avoiding
the scarlet sky

midnight wind
ruffles the fur
of a lone wolf

Masumi Orihara rewatched the 1965 epic drama “Doctor Zhivago” right to the final scene of the poet scribbling poetry in the dead of night while listening to wolves howl from across a vast snowfield.

the poet eloped
to a warm hideout
wolves howling

Satoru Kanematsu buttoned up his overcoat and pulled his hat down low over his eyes as he passed by a police box on a cold wintry afternoon in Nagoya.

Most Wanted
the faded poster
at year’s end

Tomislav Sjekloca’s patience was tried at a clinic in Cetinje, Montenegro.

Mary White cared for her mother who suffers from tinnitus. Warm-hearted Murasaki Sagano thought of a faraway friend. Teiichi Suzuki overheard someone talking by smartphone at a shrine in Osaka.

silence
how loud the ringing
in her ears

Full of love
warms a distant soul
the cold moon

she pours blackberries
into the silver pan
moonlight

stars flicker…
one more drink
for the new year

The next issue of the Asahi Haikuist Network appears Feb. 5 and 19. Readers are invited to send haiku about plum blossoms or love on a postcard to David McMurray at the International University of Kagoshima, Sakanoue 8-34-1, Kagoshima, 891-0197, Japan, or by e-mail to (mcmurray@fka.att.ne.jp).