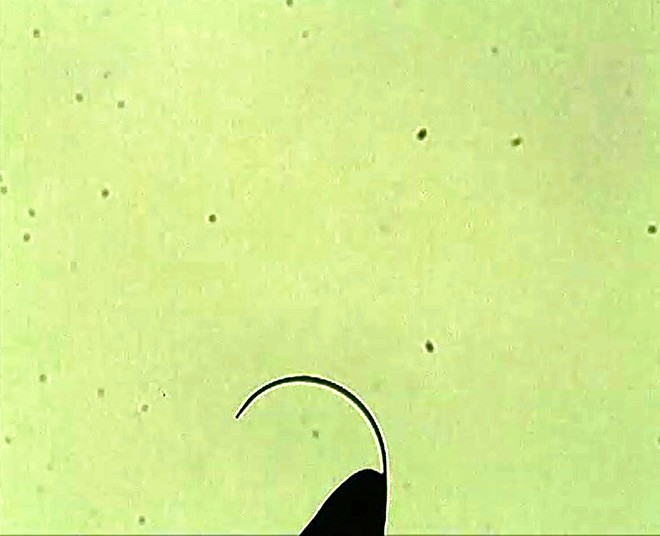 The crystal bends when ultraviolet light is applied. (Provided by Kingo Uchida)

Researchers at Ryukoku University in Kyoto are working to uncover the mysteries behind unique organic crystals that might one day lead to controlling robots simply by shining a light on them.

The scientists produced microscopic crystals from organic compounds that change shape and swing in a controlled direction when light is shone on them.

The team is led by Kingo Uchida, a professor of organic functional material chemistry in the Faculty of Advanced Science and Technology at the university.

“I believe we are moving into new territory with a system in which light can be used for remote control,” Uchida said.

In the past, Uchida has done research on crystals that, when applied to a surface, increase the material’s ability to repel water, or can conversely increase its ability to attract water.

The group shed some light on its research in a paper published in the British journal Chemical Science last year about a thin, needle-like crystal about 650 micrometers long and 3 micrometers thick.

When the researchers applied ultraviolet light from the side, the crystal bent away from the light before bending back toward it.

When visible light was applied in place of the ultraviolet light, the crystal then straightened out.

An examination of the crystal’s structure revealed that molecules on the side they shined light onto had partially changed shape and bent away from the light.

In the second stage where it bent toward the light, the molecules changed in a way similar to what happens when quenching metal.

The molecules’ phase relationship had changed, the scientists said.

The second stage movement was very fast for a crystal, occurring less than a second after the crystal bent away from the light.

The researchers said it might be possible to move small objects using the crystal and, in theory, a robot made up of materials other than metal.

“The characteristic of the object’s change when it returns to its original form could also be applied in the field of shape memory,” Uchida added.