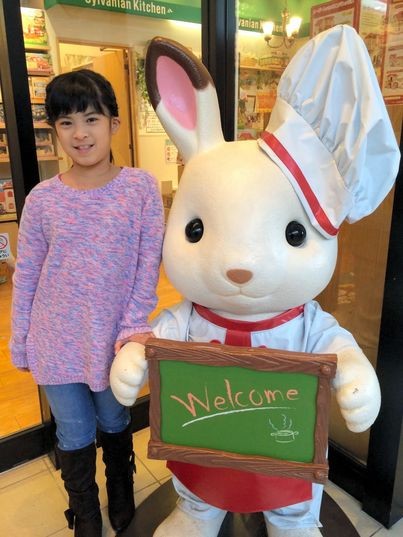 Mia Kurihara after her relocation to Noda, Chiba Prefecture (Provided by the woman who used to work with Mia’s father)

To a former co-worker, Yuichiro Kurihara appeared a loving and doting father to his young daughter, Mia, as the girl gave no signs of being in distress.

So, the woman reeled from news reports in 2019 that the 10-year-old girl had been fatally abused by her father, who was arrested in connection with her death.

She began blaming herself for not saving Mia.

In the two years since the elementary school fourth-grader died in Noda, Chiba Prefecture, she has repeatedly asked herself “why could I not be aware” of the mistreatment the girl was suffering.

The woman funneled her remorse into resolve to stop such a tragedy from occurring again. She undertook training in "color therapy" to help troubled children in similar crisis.

SPENT TIME WITH FATHER AND DAUGHTER

The woman was formerly employed in the same workplace in Okinawa Prefecture with Kurihara, 43.

She even accompanied the father and daughter on shopping and leisure activities.

To her, Kurihara appeared to be enjoying picking out clothes for Mia. The parent and child joked and laughed, and it seemed that he was a good father to Mia.

The woman saw Mia for the last time around summer 2017, before her family moved to Noda. The girl flashed her bright friendly smile as usual then.

As she continued to see images of Mia’s smiles through social media and other means, the former co-worker believed her family continued living a normal life.

But then she saw a TV news report saying Mia had been found dead in the bathroom at her home late at night on Jan. 24, 2019, and that her father had been arrested on suspicion of inflicting bodily injury.

“That must be a lie,” the woman recalled thinking at the time. Her tears did not stop.

According to trial records and other sources, Kurihara did not allow Mia to eat or sleep, and poured cold water over her repeatedly as part of what he described as “discipline.” All the things he reported doing were beyond the woman’s comprehension.

Each time she took a bath with her own child or looked at the dozens of photos of Mia on her smartphone, the woman was caught up in memories of the girl.

Kurihara was indicted on six charges, including bodily injury resulting in Mia’s death, and was sentenced to 16 years in prison by the Chiba District Court.

The defendant has appealed the sentence, citing that the punishment is unreasonably severe, and the ruling on his appeal is scheduled for March 4.

Mia’s mother, 33, was convicted of aiding and abetting her husband in the abuse. She was sentenced to two and a half years in prison, suspended for five years with probation.

It has also surfaced that some failures in administrative procedures contributed to Mia’s death, such as the Noda city’s education board handing over to Kurihara a copy of a questionnaire Mia filled out to report her father’s violence against her.

The questionnaire, done at her elementary school, shows Mia was already being subjected to abuse by her father in November 2017, a few months after his former colleague saw Mia for the last time.

Although the woman was left alone with Mia on many occasions, she did not see any signs of abnormalities occurring. Imagining Mia's suffering, the thought fills her with regret and guilt.

“I am really sorry for being unable to recognize her troubles,” the woman said.

Following the tragedy, she learned of color therapy at a booth in a local child care event. It is said under the method that unspoken feelings can be determined based on the arrangement and other factors involving variously colored shapes children choose.

The woman spent a total of 20 hours taking training provided by a private organization about the technique while taking care of her family. She finished the course in spring 2019.

“No one should be victimized (by child abuse) like Mia in the future,” she said. “I will work to be aware of the suffering of troubled children.”

Though she could not fully start on her endeavor amid the novel coronavirus pandemic, the woman plans to utilize her skills as a volunteer at programs themed on child-rearing and elsewhere so she can recognize kids’ true feelings and problems.

The color therapist said she currently cannot help but monitor the conducts of depressed children and parents scolding their children whenever she sees those occurring in public.

“It is sometimes difficult for children in a vulnerable position to give signals off asking for help on their own,” she said. “For that reason, adults and society paying extra attention to them is important.”