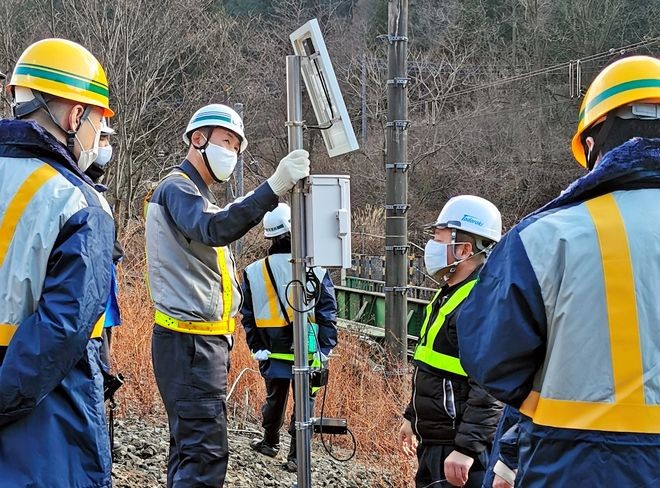 A solar panel is combined with a Shika Sonic unit set up along the JR Chuo Line so it will work on generated power. (Provided by T.M. Works Ltd.)

A railway operator out of options in a long battle to stop a stream of train collisions with wild animals has turned to psychological warfare to scare them off the train tracks.

The Hachioji branch of East Japan Railway Co. (JR East) has set up a special device along its tracks that emits a high frequency sound that animals hate, hoping it will drive them off.

It had tried using fences to keep deer and other animals from entering areas near the tracks and lights to deter them, but both failed.

But it is counting on the Shika Sonic, which generates high-frequency sounds from 12 to 30 kilohertz, to have the greatest effect among all it has done to date to stop the string of accidents that have disrupted rail traffic and inconvenienced passengers. "Shika" means deer.

T.M. Works began working on the Shika Sonic in 2017 as a product for reducing the number of car accidents involving wild animals, and in 2018 marketed a model that could be mounted on the front bumpers of automobiles.

T.M. Works President Hideaki Todoroki, 56, was then asked by Fuji Kyuko Co. whether the Shika Sonic could be applied to work on railway tracks.

When it was tested at two spots between Kami-Otsuki and Tanokura along the Fujikyuko Line in September 2018, the Shika Sonic was found to reduce collisions with animals.

The JR Chuo Line has been plagued by a succession of accidents where trains have hit wild animals.

Starting in 2009, the railway set up fences in Yamanashi Prefecture along routes totaling 28 kilometers to keep animals out.

In November 2018, it tried the Kuruna Laser, a device that uses LED light, to scare off the animals.

Despite the measures, trains continued crashing into animals and the number of accidents actually rose.

Inspired by the results along the Fujikyuko Line, the Hachioji branch installed the Shika Sonic on a trial basis in December last year.

It was set up at 13 locations between Hatsukari and Enzan. The railway will then observe the effects of using the Shika Sonic for a year through December 2021.

The Shika Sonic was upgraded in June last year to increase the angle at which it can spread noise from 60 degrees to 100 degrees. The new model has an added range of effect of 20 meters and can now send sounds to a distance of 70 meters away.

T.M. Works also added several types of noise to the Shika Sonic to stop animals from getting used to the sound it makes.

Wild animals appear around train tracks more frequently at night, so the railway will turn the Shika Sonic on early in the morning and in the evening until the last train runs but keep it switched off in the day.

Since deer are apt to lick railway tracks to take in iron, the Shika Sonic will also be switched off between the last train at night and the first train in the morning.

“If (the Shika Sonic) worked for 24 hours daily, they (deer) would appear in different regions, forcing the railway operator to cover a broader area to chase them,” Todoroki said. “What's important is to find a better way to live together with animals.”