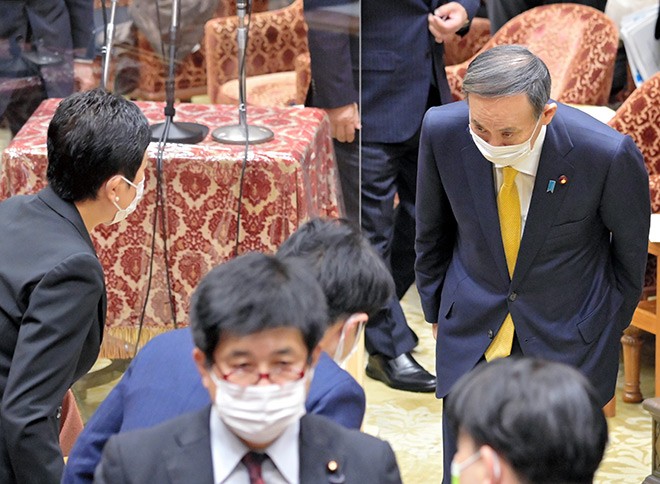 The ruling Liberal Democratic Party is moving to drop a planned legal revision that would impose prison terms against COVID-19 patients who refuse to be hospitalized, sources said.

The LDP is eager to pass bills to revise the Infectious Disease Prevention Law and the special measures on dealing with the COVID-19 pandemic to prop up Japan’s defenses against the spread of the virus.

However, opposition parties have denounced as too heavy the proposal to criminally punish infected individuals who reject hospitalization or leave a hospital against medical advice.

Under the bill to amend the Infectious Disease Prevention Law, offenders could be imprisoned for up to a year or be slapped with a maximum fine of 1 million yen ($9,600).

“We cannot accept a penalty that goes so far as imprisonment,” said Yukio Edano, leader of the main opposition Constitutional Democratic Party of Japan.

The Cabinet approved the bills on Jan. 22, and the LDP is set to start Diet debate of the legislation on Jan. 29.

But the proposed punitive measures have been a sticking point.

The chief directors of the LDP and CDP of both the Lower House Health, Labor and Welfare Committee and the Cabinet Committee met for an hour on Jan. 26 to iron out their differences over the two revision bills.

The CDP representatives demanded modifications to ease the criminal punishment measures, which they say amount to restrictions on private rights.

Their LDP counterparts replied that they will weigh what they can do concerning their demand.

The ruling party is considering arranging a meeting of the secretaries-general of the two parties on Jan. 27 if the two sides cannot find common ground.

The LDP is leaning toward deleting the imprisonment provision to move along the process of passing the bills, the sources said.

Another idea that has been floated within the ruling party is to reduce the maximum fine amount from 1 million yen to 500,000 yen, the sources added.

The revision bill also includes criminal penalties for patients who refuse to cooperate with public health centers in their efforts to identify the source of the infections.

Opposition to the imposition of criminal penalties is also strong outside the Diet.

The two organizations noted that trust between authorities and the public forms the basis of efforts to contain the novel coronavirus.

They also called on the government to secure personnel to support and accurately grasp the condition of COVID-19 patients who are self-isolating at home and have no access to doctors.

Katsuhiko Uchida, chief of the Japanese Association of Public Health Center Directors, said the association’s position is that the revision should not jeopardize assistance that public health centers have provided based on the philosophy of accommodating the needs of the public.

He added that the association is not aware of any calls for criminal penalties against defiant patients from public health facilities.

Public health centers’ tasks include finding medical centers or accommodation facilities for people who test positive for the novel coronavirus.

The revision bill for the special measures law would allow for penalties against businesses that reject prefectural authorities’ orders to close or shorten operating hours after authorities recognize the virus spread as threat to public health in their jurisdictions.

These penalties would mainly be administrative fines, not criminal punishments, and could be imposed even if the area is not yet under a state of emergency.

Key points of discussions between the LDP and CDP are: whether prefectural authorities can impose the penalties ahead of a state of emergency; the extent of the penalties; and emergency relief to businesses that comply with authorities’ instructions.

Opposition parties are calling for a balance between the relief and punitive measures in the legislation.