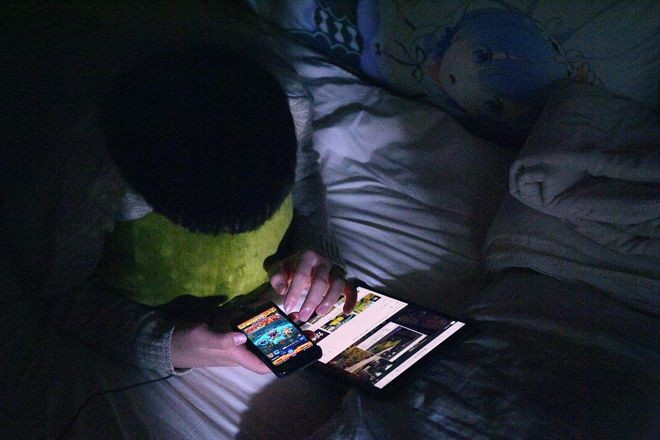 A Tokyo student plays a smartphone game while watching a video of gameplay on a tablet device. He turned the lights off to more clearly see the screen. (Asahi Shimbun file photo)

An advertisement has drawn fire from critics who say it glamorizes and even encourages video game addiction.

The ad in question is for “Lost Ark,” an online role-playing game for personal computers released in September. It has been played more than 8.8 million times since the ad appeared on YouTube.

The ad focuses more on young people obsessed with the game than actual gameplay footage. One man in the ad can’t help but play the video game all night. Another player, a woman, sits in front of the computer display in a dark, messy room.

The users, who don’t know each other, join forces to play the game before the ad ends with a tag line: “This world is just like a springtime of life.”

“I was struck by the portrayal of the commercial that encourages excessive playing of video games,” said Yoshiki Koga, 28, a graduate student who studies gaming addiction at Chukyo University.

He said the ad shows typical symptoms of addition, such as giving priority to playing video games at night while sleeping during the day.

Koga and other members of a self-help group for gaming addicts said they are concerned that the commercial could end up worsening the addiction problem.

More than 900,000 people in Japan are believed to be suffering from gaming and other internet addictions.

The Japan Online Game Association, which consists of 41 companies, publishes information on its website to raise awareness about addictions. But the website has no entries regarding self-imposed regulations on advertisements.

ASK, a Tokyo-based nonprofit organization that provides support for recovering addicts, contacted the Consumer Affairs Agency in early December. The agency confirmed the content of the ad and relayed its opinions to the gaming industry.

“We have no intention of glamorizing and encouraging addictions,” a representative of the game management company responsible for the video ad told The Asahi Shimbun. “We have no plans to change our policy (on production of commercials), but we do appreciate valuable opinions.”

“Lost Ark” was developed by a South Korean company, but it is managed by a Japanese company here.

Discussions have long been carried out around the world to regulate advertisements for alcohol in light of alcoholism problems.

In Japan, an alcohol industry organization stopped airing commercials in 2015 featuring chugging, gulping sounds and close-ups of throats out of consideration for alcoholics who might find these effects “painful.”

“Alcohol advertising has incorporated self-imposed regulations since the 1980s while the industry and civic groups continue to exchange opinions,” said Tomomi Imanari, head of ASK. “But it is true that there are so many companies in the gaming industry, including overseas firms, and that the industry has yet to have substantive discussions on commercials.”

Imanari said it meant a lot for experts and those suffering from gaming addiction to convey their concerns to the industry for the first time.

“I hope industry members understand the fact that there are painful portrayals and expressions that can only be perceived by those who suffer from the addiction,” she said.

The Consumer Affairs Agency said it is strengthening its collaboration with ASK and other parties to address an increasing number of problems involving purchases of in-game items, which could stem from gaming addiction.

“It is desirable to have a system where users can deliver their voices to creators,” said Shigeo Naito, chief of the agency’s Policy Planning Division. “It is important to create an environment where both sides can exchange opinions.”