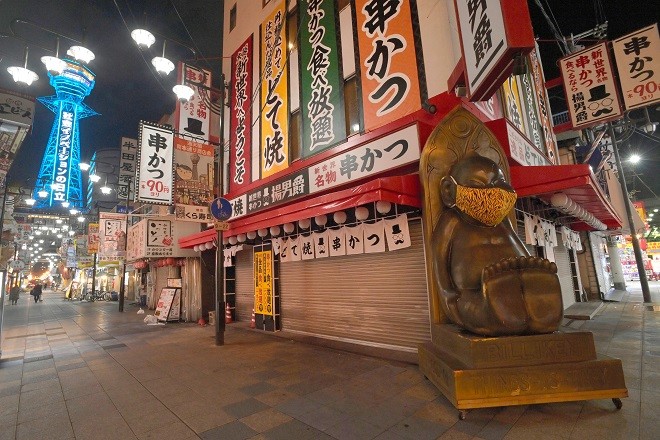 Few visitors are seen in Osaka's Shinsekai entertainment district on Jan. 14, the first day of the second state of emergency for the prefecture. (Tatsuo Kanai)

Twenty days after a state of emergency was declared for the second time amid surging COVID-19 cases, the situation still requires the government to focus its policy efforts on stemming the spread of the new coronavirus.

But the measure is imposing constraints on a widening scope of economic activities.

It is vital to lay a foundation for economic recovery while ensuring that hard-hit industries and workers will receive support from society as a whole.

Taken together, the 11 administrative regions covered by the state of emergency, Tokyo and 10 prefectures account for a majority of the nation’s population. People in these regions are urged to avoid not only eating out during nighttime hours but also unnecessary outings and eating with people other than their families, in general.

There is a compelling case for taking this strong policy action given that the health care system is hard-pressed to take care of patients.

While the measure has curbed the rapid expansion of newly confirmed COVID-19 cases seen earlier this month, it is still unclear whether the latest wave of infections will be brought under control by the end of the one-month state of emergency as the government is hoping.

To help the nation wiggle out of this dire situation as quickly as possible, the government needs to make all-out efforts to bolster the nation’s epidemic control and medical care capabilities.

These policy priorities mean that the consumer sector, particularly the restaurant and hospitality industries, will have to keep bearing the brunt of the negative impact of the restrictions.

The effects are likely to depress gross domestic product growth, if not as badly as during the April-June quarter of last year, when the first state of emergency was declared. A growing number of private-sector forecasters are predicting a contraction of the economy during the January-March period.

But the Japanese economy as a whole is not on life support, with the manufacturing sector in relatively fine shape.

The government should be able to prevent the economy from falling into a downward spiral if it effectively uses financial and fiscal stimulus to prop up income and employment.

The government needs to continue taking quick and flexible policy actions to shore up the economy while focusing its attention on the tourism, restaurant and other industries that have been going through hard times for nearly a year.

Meanwhile, the stock market has been on a roll. The benchmark Nikkei stock index has surged past the levels prior to the pandemic and is now raising concerns about overheating.

It is not without reason that investors are betting on a healthy economic recovery after many people have been vaccinated.

There are investments that businesses should continue making in response to such key industrial trends as further digitization of the economy. Economic activities that do not hamper efforts to contain the infectious disease should be promoted steadily.

It would be better if companies showing good earnings performances commit themselves to continued wage hikes during the “shunto” spring wage negotiations between labor and management.

However, the Japan Business Federation (Keidanren), the nation’s most powerful business lobby, is indicating less willingness to support wage increases while saying “an increase in base pay is an option” for many companies.

To be sure, there are companies that have no choice but to place a higher priority on securing their survival and maintaining their workforces. But companies that have boosted their financial strength during the economic recovery in the past several years should now use their accumulated cash reserves to support workers as an investment for the future.

If companies cut back on their new recruits excessively, they will have to pay a price in the future for their behavior, which hurts job seekers and society.

Even if new coronavirus cases start to decline, the government should continue policy efforts to beef up the nation’s epidemic control and health care systems and establish an effective system for redistribution during such a public health crisis.

Such efforts will help ensure stable long-term economic growth. This is what the past year has made clear.

The government should not skimp on spending human, material and financial resources for this purpose.

If it hastily starts reopening the economy without laying a solid foundation for economic recovery before a sufficient number of people receive vaccinations, the government could end up allowing a new surge in cases and returning to square one in its battle to overcome this crisis.

It is crucial for the government to take steps according to a well-thought-out medium- and long-term strategy.