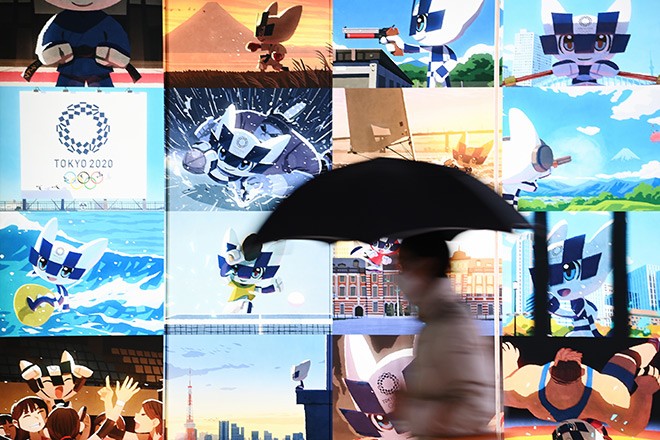 Images of the official mascots of the Tokyo Olympic and Paralympic Games are on display in Tokyo’s Shinjuku district on Jan. 23. (Takuya Isayama)

Professor Yuji Nakamura was caught completely off-guard by his students’ sea change in attitude toward the Tokyo Olympics.

Just months ago, some of them had enthusiastically volunteered as helpers for the postponed 2020 Summer Games.

But at a mock news conference on Jan. 4, when the Utsunomiya University students were acting as Olympic organizing officials, they were all in agreement: “We have made the decision to cancel the 2020 Tokyo Olympic and Paralympic Games.”

It’s not just young people who have soured on the Tokyo Games. Even those who can recall the “magic” of the 1964 Tokyo Olympics say the spell has worn off for this year’s rescheduled event.

Olympic fever has died down so much among the pandemic-weary public that anti-Olympic protesters in Tokyo who were once vilified as unpatriotic are now receiving words of encouragement.

Nakamura, a 59-year-old professor of the School of Regional Design at the university, split the 20 students in his “Policies of sports and leisure” course into five groups. They were assigned to act as Olympic organizing officials and discuss the pros and cons of hosting the quadrennial sporting event amid the novel coronavirus pandemic.

After a 30-minute online discussion about politics, economics and other factors related to the Games, all five groups concluded that the Olympics must be canceled.

“It is difficult to hold qualifying sessions, which means the selection process is not fair,” one group said.

“The health care system cannot catch up with the virus,” another group said.

Nakamura had expected at least one group would decide to postpone the Games again or hold the event without spectators.

In autumn, Nakamura asked a group of students about their opinions on the Summer Games.

“I have signed up as a volunteer so I want the Olympics to be held,” a student said.

“I believe the Olympics energize society,” another student assessed.

For Nakamura, the Olympics have always been special. “It’s more than just a game. It has the power to move the world,” he said.

But the novel coronavirus has also changed the world, as well as attitudes on holding the sports extravaganza.

“I have to admit that in the midst of the pandemic, students today may not have special feelings for the Olympics anymore,” Nakamura said.

The public’s change of heart is also evident on the streets of the capital.

A 60-year-old man has joined a street demonstration every month to voice opposition to the Tokyo Olympics and hand out fliers. Protesters have argued the Games are huge waste of taxpayers’ money, and the costs will rise further because of the postponement and necessary adjustments.

He said he used to get icy stares from passers-by as if he was an oddity. They could not understand why anyone would object to holding the Olympics, he said.

“Around last summer, when the second wave of the pandemic hit, people on the street started seeing us in a different light,” the man said.

Nowadays, more people are taking fliers and listening to what the protesters have to say about the Olympics.

He said he has been accosted by people who say, “Good luck!” and, “We have more important things to worry about than hosting the Olympics, don’t we?”

Satoshi Ukai, a 65-year-old professor emeritus of modern French literature and thought at Hitotsubashi University, has expressed opposition to the 2020 Games since the event was awarded to Tokyo in 2013.

Ukai said the Japanese public has embraced the narrative that the 1964 Tokyo Games played a pivotal role in Japan’s postwar rebuilding. That event filled in for the 1940 Tokyo Olympics that were canceled because of World War II.

Since then, the public has shared a social memory that “the Olympics are a totally awesome event,” Ukai said.

But the COVID-19 pandemic has “lifted the spell,” he said.

“The public has realized that obsessing over the Olympics is detrimental to the measures to contain the pandemic,” he said. “It was a magic spell after all. Once the spell is broken, it will become irreversible.”

“The romance is over,” a 49-year-old man who runs a bar in Saitama Prefecture posted on Twitter in November.

Shortly after that tweet, he canceled 12 precious Olympic tickets for men’s basketball that he had won in the lottery. He received a refund of 180,000 yen ($1,730).

He was looking forward to seeing the competition live at Saitama Super Arena, an Olympic venue not far from his neighborhood, with his customers.

The bar owner became hooked on the Olympics when he watched the U.S. basketball “Dream Team” dominate the 1992 Barcelona Games.

The man had been playing the sport since he was a junior high school student. But seeing the team led by NBA stars like Michael Jordan and Magic Johnson was something special.

He said he was also moved by Kosei Inoue’s gold-medal performance in judo at the 2000 Sydney Olympics.

“Watching a sport that I would not normally see is the appeal of the Olympics, and it thrilled me,” the man said.

He said he was looking forward to seeing Rui Hachimura, a forward for the Washington Wizards, return to Japan and play in the 2020 Tokyo Games.

But the bar owner soon had more pressing matters to deal with.

He needed the 180,000-yen refund to save the bar. He also said he was worried about contracting the virus by attending the basketball games.

“I can’t even foresee my life right now,” he said. “I’m in no mood for having lots of fun at the games.”

Nonetheless, he still hopes the Olympics will be held for the sake of the athletes.

“If it can be held safely, I want to buy a ticket again,” he said.

The Games’ organizer said that of about 4.45 million tickets that had been sold, 810,000, or 18 percent, have been canceled and refunded.

An Asahi Shimbun survey conducted on Jan. 23 and 24 showed that only 11 percent of voters want the Olympics held in summer as scheduled, 19 percentage points down from a December survey.

But government leaders in Japan have flatly denied the possibility of canceling the Games. They are betting the house on a COVID-19 vaccine and plan to start distributing doses as early as the end of February.

Prime Minister Yoshihide Suga has said that holding the Olympics would be “proof that humankind has overcome the coronavirus,” repeating the phrase uttered by his predecessor, Shinzo Abe.

Suga, whose approval ratings have plummeted, believes he can win public support for his aggressive remarks concerning the Olympics once the inoculations begin.

“That will change the mood of the people,” Suga said.

Tokyo Governor Yuriko Koike, who has sometimes butted heads with the central government over how to deal with the pandemic, appears to be in step with Suga on the Olympic issue.

After The Times, a British newspaper, reported that Japanese government officials had privately concluded that the Olympics will have to be canceled, citing an anonymous source, Koike immediately rejected the article.

“We should wage a protest” she said on Jan. 22. “There has been no such talk at all that the Games will have to be canceled or postponed.”

The Suga administration views the Olympics and the return of overseas visitors as a now-or-never spark for the economy that has been battered by the pandemic.

Under the administration’s best-case scenario, a successful Olympics will provide a springboard for Suga to hold a snap Lower House election.

That scenario will work for Koike as well, a Tokyo metropolitan government official said.

The capital “may not feel the benefits (of the Games) for a temporary period, but it will boost the flagging economy,” the official said.

But with the greater Tokyo metropolitan area still fighting to bring the third wave of the virus under control, some officials are voicing opinions that go against the grain of the government’s official stance.

“How many Tokyo residents want the Olympics to happen?” a high-ranking metropolitan government official asked. “It is not surprising that people have urged the government to spend more money on anti-virus measures (than on Olympic preparations).”

In addition, the COVID-19 situation remains much more grave in many other countries around the world.

“Realistically speaking, if the United States and major countries in Europe decide not to (send athletes), it won’t be an Olympics in the true sense of the word,” a person close to Suga said.

A top official of the Japanese organizing committee called for patience.

“We’re biting the bullet right now,” the official said. “Once the effects of the state of emergency kick in, the vaccine inoculation program gets started and the number of new infection cases goes down, things will get better.”