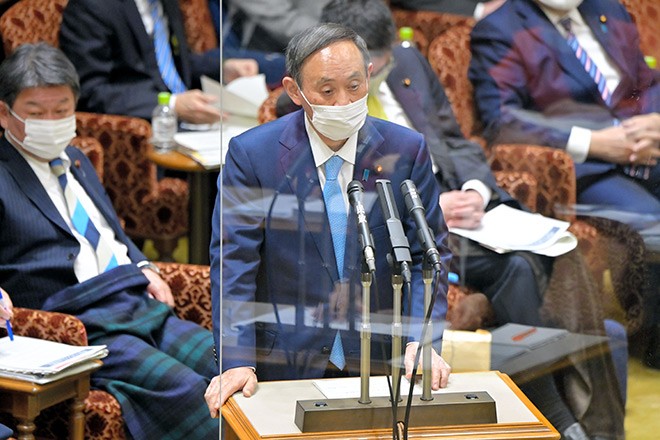 Prime Minister Yoshihide Suga responds to a question from Michihiro Ishibashi of the opposition Constitutional Democratic Party of Japan at the Jan. 27 session of the Upper House Budget Committee. (Kotaro Ebara)

When Prime Minister Yoshihide Suga was asked what citizens being battered economically by the COVID-19 pandemic could expect in the way of government aid, his response astonished opposition lawmakers.

“The government has as a last resort the framework known as public assistance,” Suga said at the Jan. 27 Upper House Budget Committee.

Michihiro Ishibashi of the opposition Constitutional Democratic Party of Japan (CDP) asked Suga, “If it becomes clear that the government’s policies are not reaching those who need help, will you pledge as your responsibility as prime minister that you will ensure they get the assistance they need?”

But Suga only touched upon the public assistance program already in place. He has long called for a policy that first asks citizens to be self-reliant.

Those who cannot make do are expected to then tap their associates for aid, and the option of relying on public assistance has always been last on his list.

The opposition parties had argued for more measures to help citizens facing financial difficulties due to the COVID-19 health crisis to be included in the third supplementary budget.

Following the ruling coalition's rejection of the demands and Suga's public assistance remarks, opposition members were up in arms.

CDP lawmaker Renho pounced on the prime minister in the afternoon session of the Upper House Budget Committee, addressing his morning comment on public assistance.

“Isn't it your job to ensure that people don't have to turn to public assistance?” she asked Suga.

Suga responded, “What is needed in dealing with the novel coronavirus pandemic is a multi-layered safety net. The government has a structure in place to deal with various problems before people have to turn to public assistance.”

Ren Ohnishi, the managing director of the Moyai Support Center for Independent Living, provide testimony at the committee session as an expert on public assistance.

Ohnishi urged that the current system be changed. He pointed to the problem of government officials inquiring into the possibility of relatives providing support whenever an individual applies for public assistance.

The system as is exposes people who apply for aid to a potential backlash from their families, he pointed out.

Suga did not respond directly to the possibility of reviewing the system and only said, “We are making efforts to help people recover a stable way of living.”

But Ohnishi expressed regret that Suga did not touch upon reviewing the application process.

“Because we now face an unprecedented crisis, I wanted him to utilize this opportunity to change a structure that causes people to hesitate about applying,” he said.