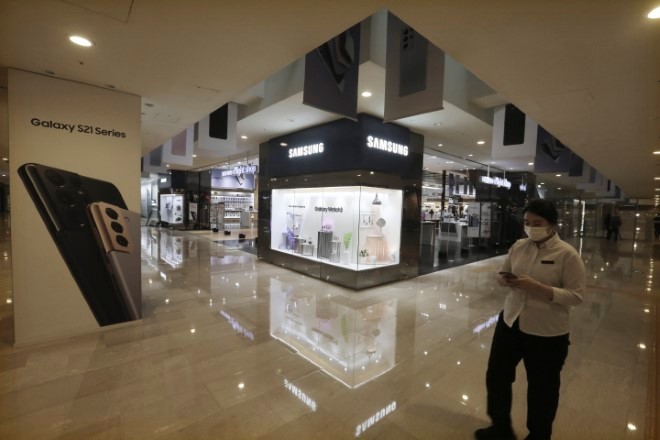 A woman passes by an advertisement of Samsung Electronics' Galaxy S21 Series smartphones at its shop in Seoul, South Korea, on Jan. 28. (AP Photo)

SEOUL--Samsung Electronics Co. said Thursday its operating profit for the last quarter rose by more than 26 percent as it capped off a robust business year where its dual strength in parts and finished products allowed it to thrive amid the pandemic.

But the South Korean tech giant expects its profit to weaken in the current quarter with a weak dollar and costs associated with expanded production lines likely affecting its bread-and-butter computer memory chip business.

Like many technology companies, Samsung has gotten a boost from surging demand for its computer chips and devices as the pandemic forces people to work from home.

Samsung has also dealt with legal issues surrounding its vice chairman and de facto chief, Lee Jae-yong, who last week was sentenced by the Seoul High Court to two and a half years in prison for his involvement in a 2016 corruption scandal that spurred massive protests and ousted South Korea’s then-president.

“For 2021, the company expects a recovery in overall global demand but uncertainties persist over the possibility of recurring COVID-19 waves,” Samsung said in an emailed statement.

Samsung’s operating profit of 9.1 trillion won ($8.1 billion) for the October-December quarter represented a 26.4 percent increase from the same period a year before, while its revenue rose by 2.8 percent to 61.6 trillion won. The company’s operating profit for the full year of 2020 was at 36 trillion won, rising by more than 29 percent from 2019, according to a regulatory filing.

Samsung saw its semiconductor business rebounded sharply last year after a sluggish 2019, driven by robust demand for PCs and servers as virus outbreaks forced millions of people to stay and work at home. The Trump administration’s sanctions against China’s Huawei Technologies have meanwhile hindered one of Samsung’s biggest rivals in smartphones, smartphone chips and telecommunications equipment.